Everything 'Star Wars': Galaxy's Edge Got Right That Avengers Campus Got Wrong - Inside the Magic 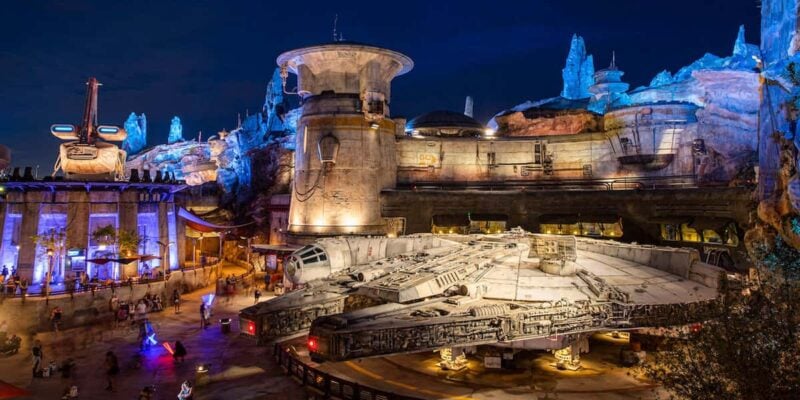 Two of the newest lands in the resorts, but Avengers Campus ultimately falls short of Star Wars: Galaxy’s Edge. Why?

To understand why Avengers Campus falls short, we need to examine why its counterpart, Star Wars: Galaxy’s Edge, succeeds. Both lands were built around the same time, which means Imagineers were conceiving and BlueSky developing around the same time, but there are some marked differences between the two lands, so let’s get into it.

Why Is Galaxy’s Edge So Immersive?

One of the many reasons Walt Disney hired filmmakers instead of architects to build Disneyland is that they didn’t tell him things couldn’t be done; they found ways to make it work. As mentioned in the Disney+ show, The Imagineering Story, one of the elements that filmmakers brought to the Park was a crossfade effect from one land to the next. Even today, if you go to a Disney Park, you’ll notice a seamless transition between Main Street, U.S.A., and Adventureland, Tomorrowland and Fantasyland, and so on.

This tradition is continued beautifully in the transition to Star Wars: Galaxy’s Edge. Every entrance into the land is disguised in such a way that Guests are barely aware of the change. In addition to that, as opposed to most areas in the Parks, there is only area music at these entrances. The only sounds being played over the loudspeakers in Black Spire Outpost are environmental, sounds of nature from a galaxy far, far away, and ships flying overhead.

Ultimately the thing that really sells this Star Wars land is the Disney trademark attention to detail. Sightlines are taken into account, and even walking through the place feels like walking through a Star Wars film, down to the reveal of the Millennium Falcon. Regardless of which direction you approach, the iconic ship comes into view almost like a cinematic wipe and floors both first-time viewers and veterans of the Parks alike.

What Sets the Merchandise in Galaxy’s Edge Apart?

A vital part of any land in the Parks is merchandise. Having such a wide variety of themes within the Parks allows for an equally wide variety of souvenirs, apparel, and more for Guests to pick up and enjoy as a memento of their trip. Just as the team at Disney took into account other design elements from around the Parks, the merchandising team also learned and kicked it up a notch.

Two of the most engaging experiences in any Disney Park, the world over, are building your own lightsaber at Savi’s Workshop and building your own droid at the Droid Depot. It’s just one of the many instances in which it’s easy to see that Imagineers really took the time to think: what have Guests wanted to do in the Star Wars Universe since 1977?

The opportunity to construct a custom-made lightsaber with your own hilt, kyber crystal, and blade is an experience that participants won’t soon forget, especially with the presentation and training given as part of the experience. The Droid Depot offers another fantastic opportunity to take home a piece of the Star Wars universe. Building an astromech droid that can not only interact with other droids but also interact with a partner app on a smartphone is ingenious. Both experiences really make you feel like you’re part of the adventure.

This attention to detail isn’t limited to the merchandise, however. Another instance in which Imagineers clearly thought about experiences Star Wars fans have been wanting to have since the first movie came out is the food in Galaxy’s Edge. It’s a dream come true for fans across the world to sit next to the Millennium Falcon and drink some ice-cold blue milk. While the other food available is more a take on things from Star Wars, it’s still tasty and feels in-world enough not to destroy the illusion of immersion.

What About the Characters and Attractions In Galaxy’s Edge?

A whole article in and of itself could be written about the amazing innovations of both Millennium Falcon: Smugglers Run, and Star Wars: Rise of the Resistance, but they bear mentioning here. Fulfilling the dreams of Star Wars fans young and old, Smugglers Run puts Guests in the seat of the Millennium Falcon, allowing them to “Punch It” and send the ship into hyperspace. Rise of the Resistance on the other hand is a thrilling ride, incorporating many different ride systems into one, and is unlike any other ride in the history of Disney or any other Park.

In another instance of Disney perfecting the immersive experience, Galaxy’s Edge characters don’t just interact with Guests for photos and meet and greets, they actually put Guests into the story and the world. Stormtroopers will roam the area ensuring order, Kylo Ren will sometimes corner an unlucky guest, or Chewie and Rey can be seen fixing up the Falcon, or recruiting for the resistance.

Where Does Avengers Campus Fall Short?

After visiting a completely immersive and jaw-dropping land like Galaxy’s Edge, an area like Avengers Campus seems out of place. With as wide a catalog, and popular as the Marvel Cinematic Universe is, one would think that this land would be a slam dunk, but it still falls short. Using the exact same rubric, let’s take a look and see why.

As opposed to Galaxy’s Edge, the entrances to Avengers Campus are wide open, and while there is an obvious attempt at a smooth transition, much of what appears in the land is very austere, brick or cement, in various shades of grey or brown. The land itself is also very small, and it feels that way. Other lands in Disneyland and Disneyworld take advantage of a small area and use tricks like forced perspective to make it feel larger than it actually is. Avengers campus however does not.

What’s With the Lack of Merchandise in Avengers Campus?

One of the most disappointing elements of Avengers Campus is the severe lack of merchandise. While this has improved in recent years, there is a severe lack of appropriate souvenirs. Sure, there are t-shirts, and a few isolated things like Spider-Man-themed goggles and web shooters, but with the plethora of props, and costumes in the Marvel Cinematic Universe, there are plenty of things that they could do, but just simply aren’t present.

Is the Food Alright in Avengers Campus?

One of the stronger parts of this land is the food. Pym’s Test Kitchen is a fun take on the ability either shrink or enlarge food, giving guests the opportunity to eat a giant meatball or a tiny bun on a regular-sized chicken sandwich. There is even a nod to the Shawarma mentioned by Tony Stark (Robert Downey Jr.) in The Avengers (2012). There are even a few good options outside Guardians of the Galaxy: Mission Breakout at a food cart.

The issue is just the volume. Where there are a decent amount of options and things to choose from in Galaxy’s Edge, the options are severely limited in Avengers Campus, and Guests often choose other nearby eateries for anything substantial beyond a light snack. This also takes them out of the land when it comes to things like attractions, causing them to spend less time there. This brings us to our next section.

There Are Two Attractions in Avengers Campus…Do They Hold Up?

Just like in Galaxy’s Edge, Avengers Campus only has two attractions but, are they scratching that same itch? Are they allowing Marvel fans the opportunity to do things in the Marvel Universe they’ve dreamed of since 2008? The answer is unfortunately no. While WEB-SLINGERS: A Spider-Man Adventure is a fun take on things like Toy Story Midway Mania, and Buzz Lightyear: Astro Blasters, it ends up feeling much like a copy of those two rides.

The other attraction in Avengers Campus is a bit of an odd duck: the Guardians of the Galaxy ride, as many Disney fans know, is a retheme of Twilight Zone: Tower of Terror, and is, therefore, more part of Hollywood Land than of the Campus proper. While the ride is fun and offers many of the same thrills as its original theming, plus the feel-good rock and roll vibes of Guardians of the Galaxy (20), it isn’t anything new, and doesn’t offer fans any sort of participation in the Marvel Universe, but rather keeps them as observers.

With So Many Characters In Avengers Campus, Why Don’t They Feel Right?

Ultimately this boils down to that same issue we’ve addressed above: Avengers Campus feels very much like Guests are expected to observe, and not participate. This isn’t to say there aren’t interactive options at the Parks with these characters, because there are. It’s just to say that it isn’t as spontaneous, nor is it as organic as in Galaxy’s Edge.

How Can Disney Fix Avengers Campus?

As with any question facing the Parks in this day and age, there’s no one answer, but several that could bring Avengers Campus up to the Disney standard. The simplest would be to start by addressing the issues named above, and bringing the characters, food, immersion, and attractions more in-line with what Imagineering has accomplished in Galaxy’s Edge.

Another simple, but effective idea would be to incorporate a large part of what is now Hollywood Land into Avengers Campus. Much of this is unused storefront space that could be put to better use with wise retheming to match a world in the Marvel Cinematic Universe. Ultimately, the best fix for Avengers Campus would be for Imagineering to allow their creative team to exercise as much passion and enthusiasm for this land, as they clearly had for Galaxy’s Edge.

What do you think Avengers Campus could do to improve? Let us know in the comments below!

Comments Off on Everything ‘Star Wars’: Galaxy’s Edge Got Right That Avengers Campus Got Wrong