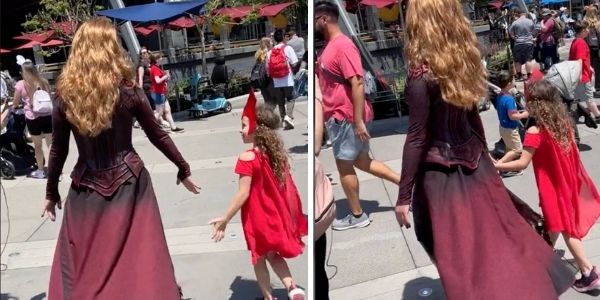 At Disneyland Resort, one of the most exciting and newest additions to the theme parks is the inclusion of the Marvel Cinematic Universe. Just last year, Avenger’s Campus was introduced to Disney California Adventure where Guests can meet Spider-Man, Loki, Ant-Man, Black Widow, Doctor Strange, and so many more characters. And of course, you have to ride WEB SLINGERS: A Spider-Man Adventure and Guardians of the Galaxy: MISSION BREAKOUT. The land brings Kevin Feige’s MCU to life, and is continuously staying up to date.

A few weeks ago we saw Moon Knight join the Campus as soon as the Disney+ show dropped, and now, America Chavez and the Scarlet Witch are available to see! Of course, this is thanks to Doctor Strange in the Multiverse of Madness (2022), which just released last weekend in theaters. For those who have not watched the film, this may be a slight spoiler to you all, so beware! In WandaVision (2021), we learn more about Wanda’s dreams and desires to be a mother. In the most recent film, we see the Scarlet Witch takeover Wanda as she possesses the Darkhold. The Scarlet Witch’s goal throughout the film is to be able to jump into a different Multiverse in which a Wanda exists with two sons and take over that life.

Since the Scarlet Witch in the Parks is playing the version of the character where this desire is still priority, it would make sense to see her gravitate towards other children and possibly steal them from their parents! In the below TikTok posted by @Vincentelejorde, we can see the Scarlet Witch took a child by the hand who was dressed as Wanda, away from her parents!

Of course, the Scarlet Witch did not actually steal the child, but it is very in character to see her gravitate towards children in the land, and have the desire to keep them all to herself!

With the release of Doctor Strange in the Multiverse of Madness, Guests can now meet Wanda in her Scarlet Witch outfit and America Chavez at Avengers Campus in Disney California Adventure. MCU’s latest female leads will be joining  Moon Knight and Mr. Knight, Iron-Man, Spider-Man, Black Widow, Captain Marvel, Thor, Doctor Strange, Ant-Man, The Wasp, The Guardians of the Galaxy, Black Panther, and the Dora Milaje, who can currently be found at the Avengers Headquarters and the Ancient Sanctum within the Avengers Campus.

However, many are unhappy with how the Marvel Cinematic Universe’s 28th feature screenings are being handled.

The conversation started with the video of an interview where Quentin Tarantino details how Disney ruined the premiere of his movie The Hateful Eight (2015) by basically forcing the Cinerama Dome, a historic theater in Los Angeles, California, to breach their contract with Tarantino. Read more here.

The Hollywood Reporter shared details about Doctor Strange 2’s theatrical debut, calling it “one of the top launches of all time” and noting that it “grossed $185 million in its debut to land one of the biggest openings of all time domestically — and the second best of the pandemic era — for a global start of $450 million.” Read more on that here.

Have you watched Doctor Strange in the Multiverse of Madness yet? Let us know in the comments below!