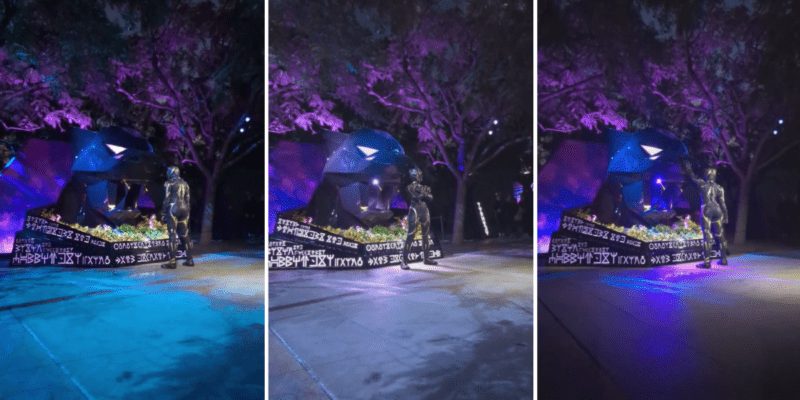 Disneyland Resort will be home to a massive event for a limited time in honor of the premiere of Black Panther: Wakanda Forever. As recently announced by Disney Parks officials, Avengers Campus at Disney California Adventure is now home to a celebration of the legacy of the Black Panther, during which Guests can encounter, learn from and celebrate the arrival of new visiting warriors, taste Wakanda-inspired delicacies, discover props from the film, and more.

While there is so much to see and learn during this heroic celebration, one particular event has already claimed its place as the most memorable moment of this Wakanda-inspired event.

Guests visiting Disney California Adventure yesterday, November 11, had the chance to meet the new warrior who has taken the mantle of the legendary Black Panther as she patrolled Avengers Campus and the surrounding areas. The new Black Panther, however, took a moment last night to approach The Black Panther Celebration Garden, an impressive exhibit that honors the legacy of the Black Panther in Wakandan lore, and pay an emotional tribute to late actor Chadwick Boseman, who played King T’Challa in Black Panther (2018).

A video of this emotional moment was shared on Twitter by Jennifer Lazo (@Jdlazo). You can see the video below.

An emotional tribute to the late Chadwick Boseman in the Black Panther memorial garden by the new Black Panther. #AvengersCampus

An emotional tribute to the late Chadwick Boseman in the Black Panther memorial garden by the new Black Panther. #AvengersCampus pic.twitter.com/t0UkrVRpH9

Guests witnessing the tribute were surely moved by the scene, as Marvel Cinematic Universe fans miss Chadwick Boseman as much as the people of Wakanda.

The Black Panther Celebration Garden and all the fantastic offerings that recently arrived at Disney California Adventure and Avengers Campus are available from November 11 through January 8, 2023, inviting Guests to immerse themselves in the sights, sounds, flavors, and power of Wakanda during this unique chapter.

Have you watched Black Panther: Wakanda Forever yet? Will you visit Avengers Campus at Disneyland Resort during this celebration? Let us know in the comments below!