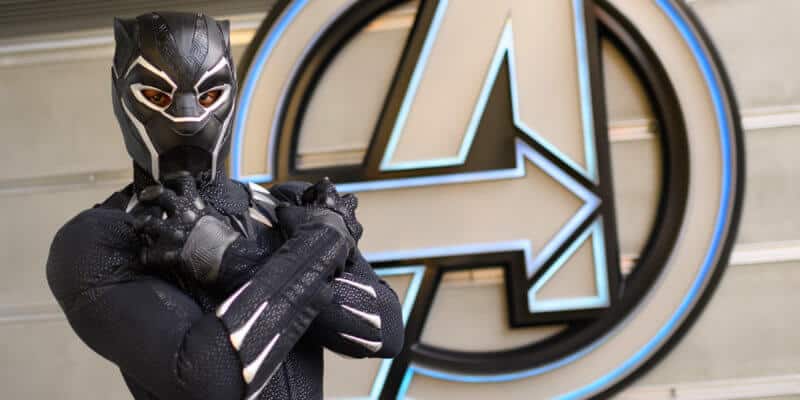 Avengers Campus at Disney California Adventure will be home to a massive celebration with the premiere of Black Panther: Wakanda Forever, bringing new encounters, activities, flavors, merchandise, and much more to the California theme park.

Disneyland officials recently announced that, with the premiere of Black Panther: Wakanda Forever on November 11, 2022, Avengers Campus at Disney California Adventure will become home to a celebration of the legacy of the Black Panther, during which Guests can encounter, learn from and celebrate the arrival of new visiting warriors, taste Wakanda-inspired delicacies, discover props from the film, and more.

And adjacent to the Campus, steps away from the site of the Collector’s Fortress, The Black Panther Celebration Garden will honor the legacy of the Black Panther in Wakandan lore, inviting Guests to relax and reflect on the legendary protectors of the Kingdom of Wakanda. The celebration will extend beyond Avengers Campus at Disney California Adventure Park, as the Downtown Disney District will welcome a unique art installation celebrating Black Panther: Wakanda Forever with a mural created by artist Nikkolas Smith, who also created the art installation “King Chad” in 2021.

Earlier this month, Disneyland announced the arrival of M’Baku, leader of the Jabari Clan, to Avengers Campus at Disney California Adventure. M’Baku will make his way into the Campus on November 11, as the Park kick starts the celebrations, to invite recruits to join in “The Way of the Jabari,” an all-new experience that will share some of the culture of the Jabari Clan through chants and percussion.

And as expected, Disney teased the introduction of the next warrior taking on the legendary mantle of the Black Panther, “Who will it be?” said Disney without revealing further details on this new character’s arrival to patrol Avengers Headquarters along with  Iron Man, Spider-Man, Black Widow, Captain Marvel, Thor, Doctor Strange, Ant-Man, The Wasp, The Guardians of the Galaxy, Black Panther, and the Dora Milaje.

For those looking to enjoy the delicacies of the Wakandan cuisine, Disney Parks Blog shared the following:

And for the Marvel collectors and fans of Black Panther, Disney will release a replica of Shuri’s gauntlet, which will be one of the several drinking vessels and more that Guests can expect to find at the Flavors of Wakanda marketplace, Shawarma Palace, Shawarma Palace Too and at select vending carts near Avengers Campus.

In addition, Guests visiting the Super Store Featuring Avengers Campus located in Hollywood Land can discover props and costumes from the film and exclusive Black Panther-themed gear to help them suit up for their next mission.

The Black Panther: Wakanda Forever celebrations begin on November 11, 2022, and will be available through January 8, 2023, inviting Guests to immerse themselves in the sights, sounds, flavors, and POWER of Wakanda during this unique chapter.

Disney Parks Blog stated that Disneyland Paris would also celebrate the next chapter in the Black Panther history but didn’t reveal any details regarding the celebrations at the Parisian Park. Inside the Magic will keep you updated as more information is released.

Are you excited about the Black Panther: Wakanda Forever celebrations coming to Avengers Campus at Disney California Adventure? Let us know n the comments below!