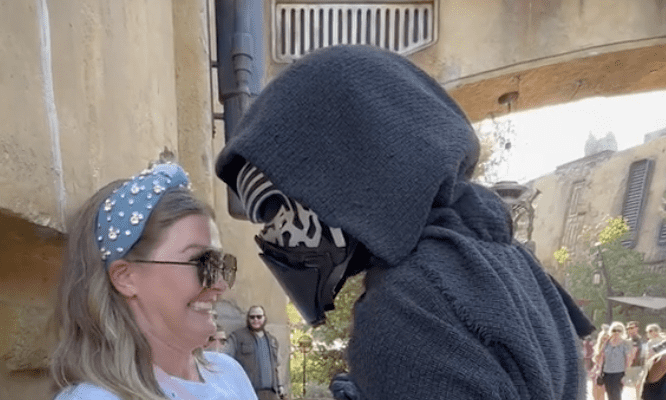 “I’ve never been so nervous in my life,” Disney content creator jordanleegreenwel wrote. “I couldn’t even speak a clear sentence.”

Star Wars: Galaxy’s Edge is known for its immersive Guest experience. Whether it’s the towering architecture, the scattered relics, otherworldly attractions, the themed dining, or the ethereal ambiance, those who visit the Star Wars land often share that they have truly entered the galaxy far, far Away.

Driving home the experience is the opportunity to interact with characters such as Chewbacca, Rey, and Boba Fett — who has made his way to Disneyland, but not Disney World — and a number of stormtroopers who have a history of interrogating Guests on sight.

One lucky fan had an unforgettable Galaxy’s Edge experience featuring Kylo Ren, “an imposing First Order warrior who is dreaded throughout the galaxy for his vicious skills in combat and his strength with the Force” per Disneyland’s website. She shared the encounter that left her “fan-girling hard” on social media.

I’ve never been so nervous in my life, i couldnt even speak a clear sentence, I could only smile😂 #kyloren #kylorenthings #galaxysedge #kylo

I’ve never been so nervous in my life, i couldnt even speak a clear sentence, I could only smile😂 #kyloren #kylorenthings #galaxysedge #kylo

In the clip, Galaxy’s Edge regular Kylo Ren takes pause in front of user @jordanleegreenwel, who appears to signal with two fingers that she’s watching him.

Ren, born Ben Solo, is the son of Princess Leia (Carrie Fisher) and Han Solo (Harrison Ford) in Disney’s sequel trilogy. Although the character goes through a redemption arc — much like his grandfather, Darth Vader/Anakin Skywalker — to end the Skywalker Saga, he is still very much entrenched in his role as Supreme Leader during Galaxy’s Edge’s place in the Star Wars timeline.

During this particular Kylo Ren encounter, he put his full power on display. “Enough,” he said, moving closer and closer to @jordanleegreenwel as she backs away giggling nervously. “Leave now.”

He continued approaching slowly, leaving her visibly flustered and backed against a wall.

“Your skills will be of value to us,” Kylo says, now inches away from the Guest’s face. “There is a place for you in the First Order.”

After lingering for a few seconds, he swiftly turned to lead his accompanying Stormtroopers through the crowd.

“He knows exactly what he’s doing,” user cam_monaco commented as swooning followers agreed that the encounter was a lucky occurrence.

For your own trip planning purposes, Disneyland’s website lists details regarding where Guests can find Kylo Ren, along with some of the Star Wars galaxy’s most notable characters:

Star Wars: Galaxy’s Edge can be found both in Disneyland Park as seen in the clip above and at Disney’s Hollywood Studios in Walt Disney World.

Guests at either location can enjoy a thrilling, interactive ride on Han Solo’s legendary Corellian light freighter on Millennium Falcon: Smugglers Run and join the fight against the First Order on Star Wars: Rise of the Resistance, build their own Star Wars light sabers and droids, and so much more.

The immersive experience extends to the food Guests can order at locations like Docking Bay 7 and Oga’s Cantina. Coffee, for example, is called “Black Caf” just like it is in the iconic Star Wars movies, and Batuuan visitors can order cocktails like the “Fuzzy Tauntaun” and the “Jedi Mind Trick.”

Set during the sequel trilogy years between Star Wars: Episode VIII – The Last Jedi (2017) and Star Wars: Episode IX – The Rise of Skywalker (2019), Galaxy’s Edge is populated by a whole host of characters, like Ren and Vi Moradi — Princess Leia’s spy — to Rey, and even, as previously noted, Chewbacca himself.

There are even more characters, like Seezelslak — Oga’s rival bar owner — who haven’t made their debuts at Galaxy’s Edge yet but some Disney Parks fans are convinced their time is coming.

Do you have a favorite Galaxy’s Edge encounter? Comment yours below!

Comments Off on Kylo Ren “Backs Guest Against a Wall” at ‘Star Wars’: Galaxy’s Edge