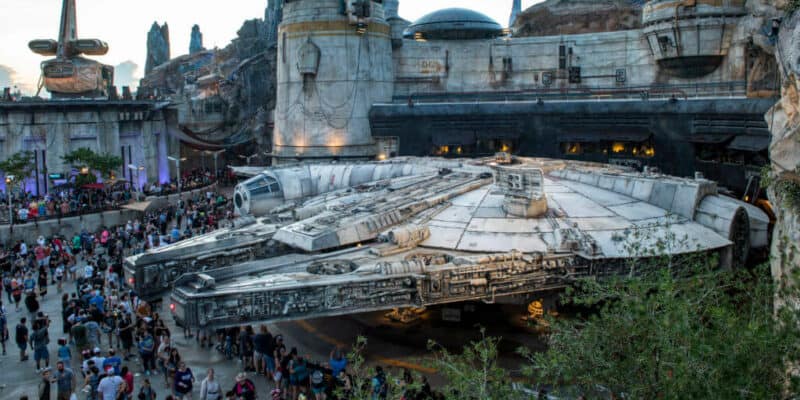 Guests can also join the Star Wars story by building their own lightsabers at Savi’s Handbuilt Lightsabers or constructing an Astromech unit at the Droid Depot.

Now, it seems that Disney has decided not to bring the magic of Galaxy’s Edge to a third Disney Park. Disneyland Paris was set to receive its own Batuu expansion alongside its version of Avengers Campus — set to open on July 20, 2022 — and a brand new Frozen land themed to resemble Anna and Elsa’s Arendelle.

In a recent interview covered by a French Disney fansite, however, Disneyland Paris President Natacha Rafalski indicated that the Star Wars land is no longer happening.

When asked, “The third thematic area mentioned in 2018 concerned the Star Wars universe, but it is no longer mentioned today. Is it still planned?,” Rafalski replied, “We are still working on the third theme. We will make announcements about this when we are ready.”

This certainly sounds like Disney has altered its plans and may be using a new theme, instead of Star Wars for the third expansion at its only European property.

Toyko Disney Resort’s DisneySea Park is set to receive its Fantasy Springs expansion — inspired by Rapunzel adaptation Tangled, Peter Pan, and Frozen — in 2023. It is possible that Disney could take inspiration from these IPs instead of Star Wars, particularly since Frozen is already coming to the Paris Park.

No announcements, though, have currently been made, but Walt Disney Company CEO Bob Chapek did previously promise fans more Tangled in Parks around the world.

What do you think? Should Star Wars: Galaxy’s Edge still come to Disneyland Paris?