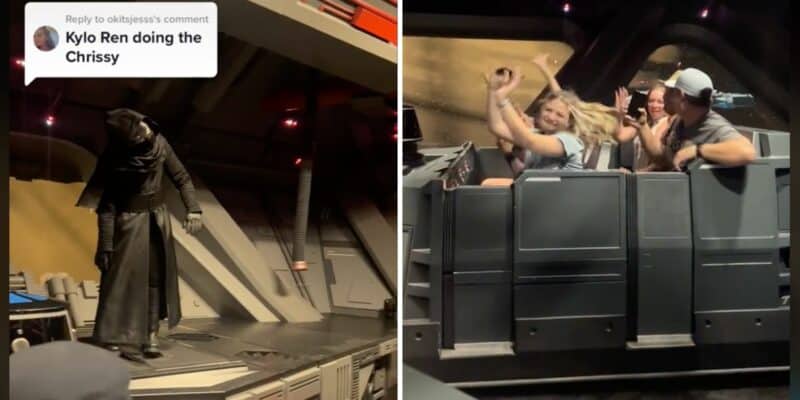 Popular bicoastal attraction Star Wars: Rise of the Resistance is no stranger to breakdowns, seen lately with examples of Guests experiencing long wait times only to be evacuated from the ride shortly after it begins.

In a TikTok video posted by @reesmcdonaldmusic viewers witnessed another breakdown, this time directly in front of the attraction’s infamous character, Kylo Ren.

The video was intended to share the dance party that ensued while riders were stuck on the attraction, bright lights shining, for around 30 minutes. However, commenters couldn’t help but notice his uncomfortable position, assimilating it to that of Stranger Things Season 4 character Chrissy Cunningham.

The following contains Stranger Things Season 4 spoilers, so if you’ve yet to watch it you might want to scroll further down.

In this latest installment of Netflix’s hit show, villain Vecna targets head cheerleader Chrissy in the first of this season’s line of gruesome killings. Dances featuring people contorting their bodies in an effort to mimic the scene began to circulate on social media, as seen in user @sabella_wise’s video below:

Despite its dark origin, the Chrissy Crumble hashtag on TikTok only grew in popularity, with Kylo Ren being the unintended latest participant.

@reesmcdonaldmusic’s comment section was filled with Vecna/Chrissy comparisons to the unfortunate ride mishap.

The responses prompted the original poster to upload a second video to the now infamous TikTok sound “Chrissy Wake Up,” a remix of character Eddie Munson’s script lines, with the caption Kylo wake up.

At the very least, these Guests appeared to make the best of a sometimes unavoidable ride malfunction situation at the Disney Parks. Fortunately, Rise’s Kylo Ren lives on to entertain those paying a visit to Galaxy’s Edge.

What is the funniest moment you’ve witnessed while stuck on a ride? Share your stories in the comments!