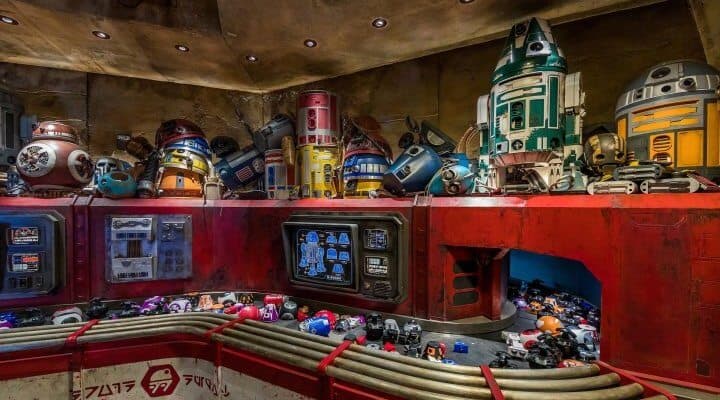 Guests can also join the Star Wars story by building their own lightsabers at Savi’s Handbuilt Lightsabers or constructing an Astromech unit at the Droid Depot.

Recently, however, a Guest from the United Kingdom noticed that anyone from overseas is blocked from reserving these Star Wars: Galaxy’s Edge experiences until they arrive stateside. The future Disney World visitor took to Reddit to inquire:

Can you book Droid Depot from the UK? I’ve read online that you can do this in the app or online but I can’t find the reservation system anywhere!

Another user confirmed that these reservations cannot be made from across the pond, but did offer a workaround using a VPN:

Unfortunately no, same with Savi’s. You need a VPN to make the site think you’re in the US so it doesn’t redirect you to the UK site.

Also, do NOT call the US booking line unless your phone plan has a really good rate on international calls. My wallet found that one out the hard way…

Someone else also noted that the VPN option does work:

I booked it via the Disneyworld.com website, you need to download a VPN on your phone (or laptop) and then set it to America. Then you can go onto the Disney website, log in and book it that way! Or you can phone up.

If you’re a European resident planning a Walt Disney World Resort vacation, this is great information that could help you secure a spot at Savi’s or the Droid Depot — reservations are notoriously hard to get on short notice!

The official description of the Droid Depot reads:

Assemble a Custom Astromech Unit
Visit a workshop stocked with parts, chips, manuals and other tech items useful for constructing your very own droid, one of the galaxy’s most indispensable sidekicks.

Choose Your Path
Travel to Black Spire Outpost, where a group known as the “Gatherers” ushers you into a covert workshop packed with unusual parts, whimsical pieces and miscellaneous memorabilia collected from the far reaches of the galaxy.

Have you ever tried to book a Galaxy’s Edge experience from overseas and encountered problems?