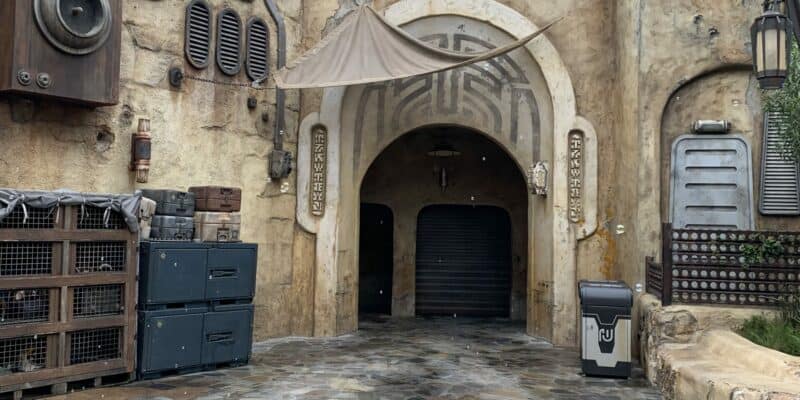 In the realm of “Ways to Know You’re a Disney Parks Nerd”, caring about the wide variety of trash cans found in every Disney theme park worldwide is pretty high on the list. All of the lands at Disney’s various properties around the world feature themed trash cans that seamlessly blend into the magical world around them, from Magic Kingdom’s Fantasyland to Disney California Adventure’s Hollywoodland, the waste receptacles are part of each Disney Park’s story.

Thus, it should come as no surprise that when The Walt Disney Company constructed its most expensive expansions ever — the 14-acre, $1 BILLION Star Wars: Galaxy’s Edge lands at both Walt Disney World Resort in Orlando, Florida and Disneyland Resort in Anaheim, California — the trash cans’ aesthetic was taken into account.

However, in this case, Walt Disney Imagineers like Scott Trowbridge outdid themselves, quietly paying homage to George Lucas’s original trilogy with the wastebaskets.

As one report notes:

Each trash can and recycling bin inside Star Wars: Galaxy’s Edge has the number 3263827 on it. This number is a hidden reference to the sector number where Luke Skywalker, Han Solo, and Leia Organa were tossed into the trash compactor on the Death Star. The notice of the trash sector is written in the fictional Star Wars language Aurebesh.

Because Star Wars: Galaxy’s Edge is part of the Star Wars timeline — it is set between Star Wars: Episode VIII – The Last Jedi (2017) and Star Wars: The Rise of Skywalker (2019) after the canonical deaths of both Millennium Falcon pilot Han Solo and Jedi Knight Luke Skywalker — original trilogy references are few and far between, so this is particularly fun for long-time Star Wars fans.

So, next time you’re about to throw a Ronto Roaster wrapper away before riding Millennium Falcon: Smugglers Run or Star Wars: Rise of the Resistance, remember to take a moment to appreciate the trash can you use just a little bit more than you normally would.

More on the Trash Compactor Scene

The trash compactor scene in Star Wars: Episode IV – A New Hope (1977) is among the most iconic moments in the entire Skywalker Saga.

Not only did it cement the friendship between the original Star Wars films’ core trio — Princess Leia (Carrie Fisher), Han Solo (Harrison Ford), and Luke Skywalker (Mark Hamill) — but it was incredible to watch on the big screen in the 1970s as well.

The official Star Wars Databank offers some additional details about the Death Star trash compactor’s infamous resident, the Dianoga — a creature who most recently made an appearance in Dave Filoni’s Star Wars: The Bad Batch:

After Luke Skywalker, Han Solo and Chewbacca rescued Princess Leia from her cell on the Death Star, they sought safety in one of the battle station’s trash compactors. It was a perilous refuge: the garbage masher was home to a tentacled carnivore known as a dianoga. The slimy monster poked an eyestalk above the surface of the garbage to see what had invaded its abode and then attacked, dragging Luke under the surface to drown him so he could become a meal later. Fortunately for Luke, the dianoga let go of him and disappeared. Unfortunately for all of the rebel heroes, the creature fled because it sensed the walls were about to move, crushing anything in their path.

Did you know this fun fact about the trash cans at Star Wars: Galaxy’s Edge on both coasts?