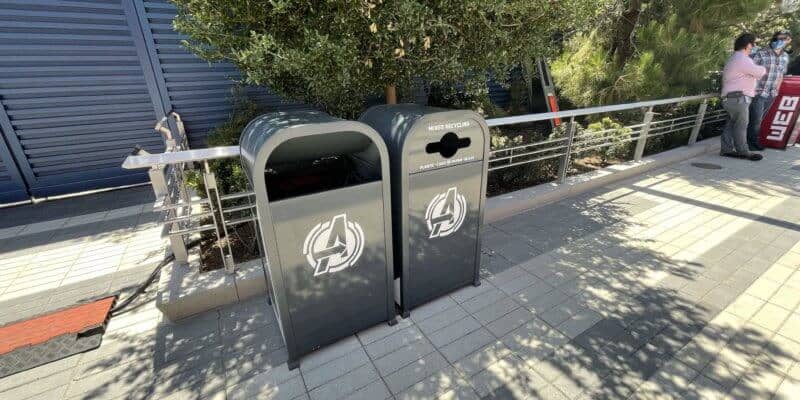 When Guests visit Disney World, one thing that they may overlook is that you never have to walk more than 30 feet to reach a garbage can.

The idea of having trash cans 30 feet apart from each other was something that Walt Disney himself created as the magic number in terms of what would be needed to ensure that Disneyland was never dirty or filled with garbage. You may also notice that you cannot buy gum on Disney property, yet another rule instilled to ensure Walt’s vision of creating a clean theme park is upheld.

If we look at Frontierland in Magic Kingdom, that land alone has over 120 garbage cans! So you can only imagine how many are scattered throughout the property. Trash cans at Disney Parks are also fantastically themed, and somehow, do not look like they should be holding any trash within them.

Although Walt Disney’s idea of a clean theme park was always the goal, the Parks can still accumulate a lot of garbage, and sometimes the trash cans can overflow if they are not emptied in a timely manner. A Tweet by WDW Bus Driver (@wdwbusdriver) sparked a conversation after the account posted a photo of an overflowing trash can in what looks to be the queue for Under the Sea ~ Journey of The Little Mermaid at Magic Kingdom.

From the Tweet, this Disney Guest is insinuating that more Cast Members need to be hired back to maintain the theme park as more Guests begin to visit once again.

Hey Bob and Bob your cost cutting is doing great!

The Tweet’s thread had a few similar opinions of other Guests shocked, as many claimed to have never seen a trash can look so unkempt at a Disney Park, while others noted that they have started to see this happen more and more often.

Infamous Quests (@IQ_Adventures) was surprised to see the photo.

I’ve never seen anything like this at WDW before. One thing that always amazed me about the parks is how clean they were, and how efficient trash removal seemed. Like… it was legendary.

I've never seen anything like this at WDW before. One thing that always amazed me about the parks is how clean they were, and how efficient trash removal seemed. Like… it was legendary.

Bunny the Kiana Stan (@angelexp624) agreed that this does not look too great for the theme park, which often prides itself on a perfect and clean look.

woah this is very out of character for a disney park, bad look for the bobs

woah this is very out of character for a disney park, bad look for the bobs

Sara Jayne was not impressed to see the trash can look so full and noted that this is not the first time she has seen this as of late.

I’ve seen pics like this from all 4 parks and it’s disgusting.

I've seen pics like this from all 4 parks and it's disgusting.

Trashed@Disney (@TrashedatDisney) made a joke, asking where they could eat if the garbage cans were overflowing, as many Guests typically use garbage cans as a table when tables are not available. This is especially true at EPCOT during festival season.

Where do they expect me to eat now?

Personally, I have started to notice a lot more cans in queues begin to overflow. When in line for Jungle Cruise, one of the cans looked similar to the one pictured above. However, as Guests are always in line, it is likely more difficult for Cast Members to get to these specific spots.

The custodial staff at Walt Disney World does a phenomenal job. With the Disney College Program helping ramp up Cast Member staffing once again, we will likely see even more custodial staff helping the existing team ensure that Walt’s vision continues to be maintained.

Have you noticed overflowing trash cans at Disney World? Would it bother you to see something like this?