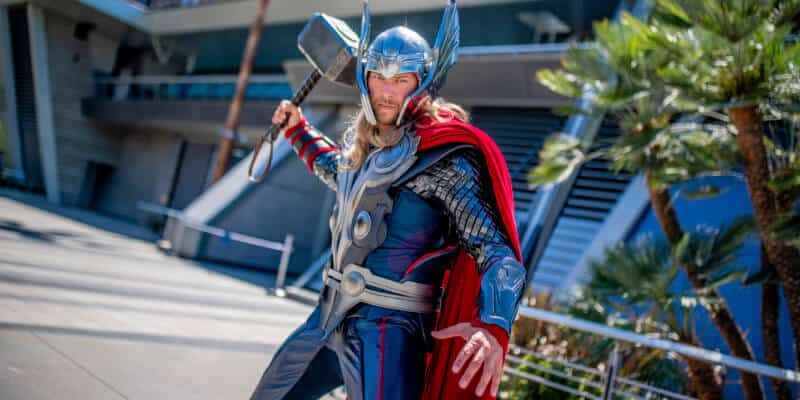 For fans of the Marvel Cinematic Universe, visiting Avengers Campus at Disney California Adventure is a dream come true. Being able to meet and interact with some of their favorite superheroes, enjoy size-defying food and drink offerings from across the galaxy, and ride the two attractions located in the compound,  WEB SLINGERS: A Spider-Man Adventure and Guardians of the Galaxy – Mission: BREAKOUT!

While Earth’s mightiest heroes have all sorts of abilities, they still need to train, and in a recent video, we were able to see a hilarious team up to train with some of the fiercest warriors.

In the video posted on Twitter by Emmanuel Elefante (@DL05EE), we can see Ant-Man, Thor, and Loki training to learn the moves of the Dora Milaje, Black Panther’s loyal bodyguards, as they share the wisdom from Wakanda. The heroes seem to have a hard time learning the routine, but being honest, training with the Dora Milaje for the first time is a challenging task for anyone. However, they quickly get a hold of it and receive a round of applause from Guests around them.

The video gathered heartfelt reactions from Guests and fans from all across the country and even some international viewers. With the opening of Avengers Campus at Disneyland Paris closer each day, it seems French Guests are eager to explore the new land and interact with the heroes that will patrol the land and help recruits live their own adventures.

At Avengers Campus, Guests can meet Spider-Man, Loki, Ant-Man, Black Widow, Doctor Strange, The Wasp, Iron Man, Captain America, and many more superheroes! Avengers Campus is constantly changing and improving to provide Guests with a fantastic experience on every visit, including the exciting arrival of new characters at the Campus, like Moon Knight, Scarlet Witch, America Chavez, and Ms. Marvel with the release of their movie or series.

And, at Disney California Adventure Park, there is so much to see and do! Guests can enjoy Buena Vista Street as they walk the roads Walt had in Hollywood, enjoy a hand-dipped corn dog at Award Wieners, and Head to Cars Land to enjoy the neon signage and Radiator Springs Racers. Guests can also enjoy the Pixar Pal-A-Round on a swinging or non-swinging gondola, learn to fly at Goofy’s Sky School, rock on the Silly Symphony Swings, and catch Jack-Jack on Incredicoaster! The list of rides and attractions never ends!

Disneyland currently has so many entertainment offerings for Guests to enjoy! World of Color is currently performing at Disney California Adventure, and at Disneyland Park, Guests can enjoy the Main Street Electrical Parade and Disneyland Forever fireworks spectacular as they light up the night. Fantasmic! returned on May 28, and Guests can journey into imagination with Mickey Mouse at Rivers of America once again. The Tale of the Lion King is temporarily canceled due to Cast Members reporting ill, but performances will surely resume soon at the Fantasyland Theater at Disneyland Park!

Have you visited Avengers Campus at Disney California Adventure recently? Let us know in the comments below!