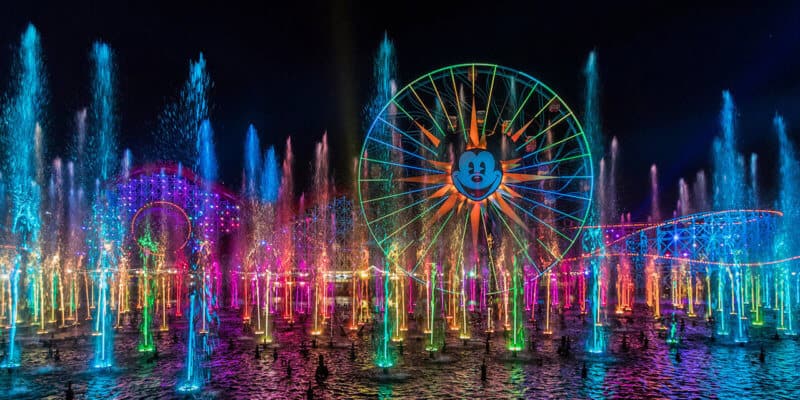 At Disneyland Resort, many Guests have been waiting to see the Parks feel like normal again. Although Guests are able to enjoy cavalcades starring Anna and Elsa, as well as Mickey Mouse Minnie Mouse, Peter Pan, Alice, and more, there still has been a void that many have been trying to fill with the lack of entertainment caused by the pandemic. Recently, many had that void filled as World of Color, Disneyland Forever, and the Main Street Electrical Parade returned!

Disneyland Forever will finally returned to Sleeping Beauty Castle at Disneyland Park, replacing Mickey’s Mix Magic. Joining the show, World of Color returned to Disney California Adventure! And finally,  Fantasmic! is preparing for its return to Disneyland park on May 28, 2022. Although not all of the entertainment is back, this was a large step towards a sense of normalcy.

The return of the shows has proven to be successful for Disneyland as crowds are flocking over. When we attended the return of all the shows on opening night, anyone who was trying to get into Disneyland closer to any showtime would have likely experienced the massive line-ups that led many of us Guests to be held at the gates. We were held at the gates due to the Park hitting capacity. A Cast Member told us that this was the fifth time they had to restrict entrance that night due to capacity. There were likely hundreds of Guests that were held at a time, and it did not matter if you had a Park ticket to Disneyland. It seems that the Park Hopping turned out to be a little more used than expected! Luckily, everyone was able to get in at some point in the night and there were multiple parade showings.

A few days ago, Disney California Adventure cut their Park hours, including the World of Color showings which left Guests upset. Last night, it seems the show was cut for unknown reasons, and once announced, the crowd released multiple loud “Boo’s”. Hastin (@hastin) posted a video where the booing is very easily heard.

They just canceled it and the boos are harder than DCA opening day.

Almost like making you commit 9 hours of your day for a show is a bad idea or something.

They just canceled it and the boos are harder than DCA opening day.

Almost like making you commit 9 hours of your day for a show is a bad idea or something. pic.twitter.com/aqDrK4JAVm

Thankfully, we are starting to see Disneyland return to a more pre-pandemic state, which means that Guests will be able to get a more “normal” theme park experience when they visit. Having all of the nighttime entertainment return is massive news and a huge draw for Guests, so it will be interesting to see how attendance picks up. At Disneyland Resort, mask mandates are now lifted for fully vaccinated Guests, as it is in Walt Disney World Resort. Although entertainment is getting closer to returning to normal, massive shows like Frozen – Live at the Hyperion have still not returned to round out the daytime entertainment.

The return of these shows also means that Guests traveling in for D23 in September will have an excuse to extend their stay so that they can enjoy the Parks! At the moment, Fantasmic! at Disney’s Hollywood Studios has not yet announced an official return, aside from 2022.

World of Color is described as:

A Breathtaking Extravaganza
Thrill as graceful jets of water shoot into the air, lasers electrify the night and perfectly timed pyrotechnics explode in a blaze of brilliant color. Watch in wonder as water, fire, light and music weave together to celebrate the magic of Disney storytelling.

Disney just broke ground on the all-new Toontown and Disneyland Park is currently in the midst of retheming Tarzan’s Treehouse. In addition, Disney just announced that the beloved Halloween celebration Oogie Boogie Bash would returning this year.

If all that weren’t enough, Disney just announced an addition to the Disneyland After Dark series titled ‘Grad Nite Reunion.’ The event will take place in June on select nights at Disney California Adventure.

Would you be upset if World of Color was canceled on your DCA day?