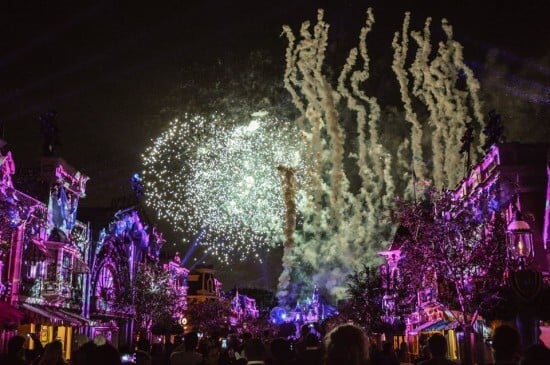 Disneyland Resort has been celebrating 90 years of Mickey Mouse with Get Your Ears On – A Mickey and Minnie Celebration, and Mickey’s Mix Magic show has been a part of those festivities. This week, Disney announced Mickey’s Mix Magic will soon come to an end and the fan-favorite Disneyland Forever fireworks show will take its place.

You can watch the full show from 2015 in our video below.

And in this video, you can listen to “A Kiss Goodnight” as Sleeping Beauty Castle sparkles at the end of the show.

Disneyland Forever closed in September 2016 as Disneyland’s Diamond Celebration ended. Now, to the delight of fans, the show returns on June 7.

Until then, guests can still see Mickey’s Mix Magic through June 6, 2019. The high-energy show features music, projections, lights, and lasers to celebrate Disney’s most iconic duo, Mickey and Minnie Mouse. During the show, DJ Mickey virtually spins a playlist of remixed Disney songs, including “Grim Grinning Ghosts,” “Friend Like Me,” and “Let It Go.” On select nights, the show also takes it up a notch with the addition of fireworks.

If you haven’t seen Mickey’s Mix Magic yet, there’s still a bit more time to catch the show before Disneyland Forever returns!

Do you have fond memories of the Disneyland Forever fireworks show from its first run? Share your stories below!