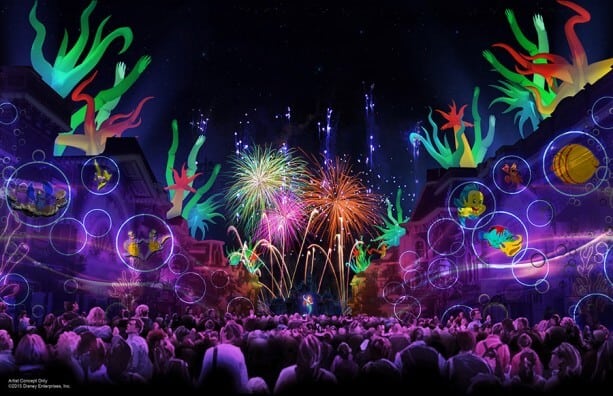 Disneyland Resort has been bustling with magic as three spectacular nighttime shows made their return, and Guests were flooding the gates to be a part of it.

At Disneyland Resort, many Guests have been waiting to see the Parks feel like normal again. Although Guests are able to enjoy cavalcades starring Anna and Elsa, as well as Mickey Mouse Minnie Mouse, Peter Pan, Alice, and more, there still has been a void that many have been trying to fill with the lack of entertainment caused by the pandemic.

On April 22, Disneyland Forever finally returned to Sleeping Beauty Castle at Disneyland Park, replacing Mickey’s Mix Magic. Joining the show, World of Color returned to Disney California Adventure! At the moment, we have seen work being done to the fountains in preparation for this return. And finally,  Fantasmic! is preparing for its return to Disneyland park on May 28, 2022. We also announced the return of the Main Street Electrical Parade, read more on that here.

Yesterday, we reported that we attended the return of all the shows, and anyone who was trying to get into Disneyland closer to any showtime would have likely experienced the massive line-ups that led many of us Guests to be held at the gates. We were held at the gates due to the Park hitting capacity. A Cast Member told us that this was the fifth time they had to restrict entrance that night due to capacity. There were likely hundreds of Guests that were held at a time, and it did not matter if you had a Park ticket to Disneyland. It seems that the Park Hopping turned out to be a little more used than expected! Luckily, everyone was able to get in at some point in the night and there were multiple parade showings.

The first showing of the Main Street Electrical Parade was at capacity and when we went to get our spot for Disneyland Forever after the parade, we overheard Cast Members noting that the firework show also hit capacity within minutes of the parade ending.

Something else that we and others, noticed was that during Disneyland Forever’s show on opening night, the fireworks stopped mid-show. It seems likely that this was due to winds picking up as the show went on, as Disneyland will typically turn off the pyro and fireworks when the wind is stronger due to the dry climate of California and increased chances of forest fires.

Online, others discussed the sudden stoppage of fireworks stating, “Was anyone watching Disneyland Forever last night? (4/22). I was super excited to see the fireworks were going off despite how windy it was during the day. About half-way thru (after Winnie the Pooh) the fireworks stopped shooting. Does anyone know what happened? I want to say winds – but I was watching from Small World and saw a large pyro burst extremely low to the ground backstage. It didn’t even rise into the air. Wondered if that had something to do w/ it?”

Another Guest said, “I was there too and never got any explanation! I’m glad we got some fireworks though and not a complete cancellation.” Many confirmed that this was likely the case of the windy weather that was ongoing during the show. Luckily, yesterday evenings show seemed to go off without a hitch!

Thankfully, we are starting to see Disneyland return to a more pre-pandemic state, which means that Guests will be able to get a more “normal” theme park experience when they visit. Having all of the nighttime entertainment return is massive news and a huge draw for Guests, so it will be interesting to see how attendance picks up come April and May. At Disneyland Resort, mask mandates are now lifted for fully vaccinated Guests, as it is in Walt Disney World Resort. Although entertainment is getting closer to returning to normal, massive shows like Frozen – Live at the Hyperion have still not returned to round out the daytime entertainment.

“Disneyland Forever” fireworks, Disneyland park.
A fan favorite, “Disneyland Forever” envelops you in an enthralling, breathtaking journey. You’ll be literally surrounded by timeless Disney stories—from soaring over London with Peter Pan one moment, to journeying across Simba’s Pride Lands the next.

What do you think about all of the shows returning to Disneyland?