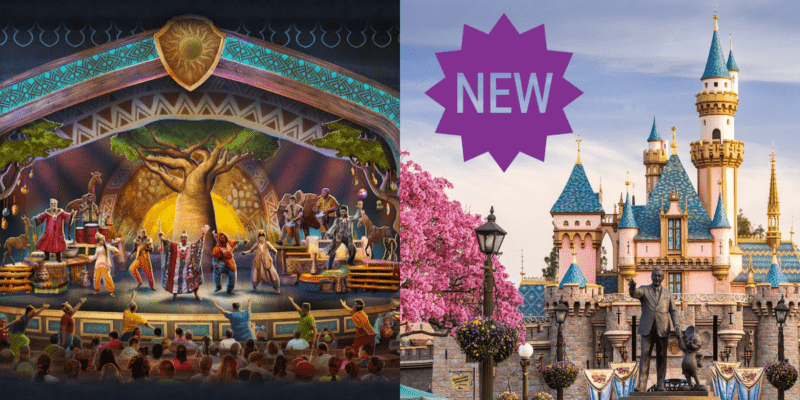 In January, Disney announced that the Disney Parks would celebrate Black History Month with “Celebrate Soulfully.” This celebration included food, music, and more focused on Black culture and heritage. “The Soul of Jazz: An American Adventure” debuted at Walt Disney World’s EPCOT, centered around jazz music featuring characters from Disney and Pixars’ Soul (2020).

Just today, the Disney Parks Blog announced that Disneyland will continue the celebrations of Black history and culture this summer at Disneyland, with new musical performances, food offerings, and a new stage show, premiering May 28.

Tale of the Lion King will tell the story of how the now-famous lion cub, Simba, became a king through “dialogue, song, dance, and percussion.” From the Disney Parks Blog:

The Lion King is no stranger to adaptions — it’s the focus of a fan-favorite show at Disney’s Animal Kingdom, Festival of the Lion King. This Broadway-style show celebrates the music, characters, and spirit of the 1994 film with talented singers, acrobats, and puppeteering. From Disney:

Delight in a Broadway-style show filled with songs, pageantry and puppetry celebrating the classic movie, The Lion King.

Relive iconic moments from The Lion King film in this exclusive show at Disneyland Paris, already popular with thousands of spectators! ​…Dancers, acrobats and singers bring back the musical enchantment of this Disney animation Classic.

The Lion King was also turned into a live-action film of the same name in 2019, and boasts a star-studded cast including Beyoncé, James Earl Jones, Keegan-Michael Key, Billy Eichner, John Oliver, and more.

If you’re planning on heading to Disneyland this summer to see Tale of the Lion King at the Fantasyland Theater, you’ll be able to enjoy special food items inspired by the show at Troubadour Tavern.

If you’re headed to Disneyland Resort between June 1 and July 4, you can celebrate with live music at Disney’s California Adventure. From the Disney Parks Blog:

Beginning June 1 and running through July 4, you’ll get to enjoy Celebrate Soulfully at Disney California Adventure park with daily live music celebrating Black music genres from Doo-Wop to Motown. Feel the nostalgia of Carthay Circle and enjoy Philly Phonics, an a cappella vocal group, performing snazzy, jazzy, tunes from the 1920s through today. Five & Dime will also stylishly sing and swing 1920s and ‘30s tunes with brass and sass!

In the evening, head to the Hollywood Backlot to enjoy the summer vibes of this special block party, featuring live musical acts seven nights a week.

The Soul of Jazz: An American Adventure from Walt Disney World’s EPCOT will also make its debut at Disneyland Resort! It will be located at Downtown Disney next door to Star Wars Trading Post and be complimentary for all resort Guests. Described as a “touring exhibit” by the Disney Parks Blog, it seems this may not be the last time we see Joe Gardner and the rest of the Soul cast in this musical celebration:

In the “Soul of Jazz: An American Adventure,” Joe Gardner – musician, mentor, and star of Disney and Pixar’s original animated film, “Soul” – takes guests on a musical tour across America, showcasing the rich history of jazz along the way.

As a tribute to a musical art form that was originated by African Americans, the exhibit illustrates the many different cultures and creators who influenced this evolving genre. Walt Disney Imagineering partnered with cultural institutions and subject matter experts to bring this story to life.

To go along with the exhibit, Guests can enjoy nightly music and a DJ on the weekends at the Downtown Disney District.

Are you excited for Tale of the Lion King at Disneyland Resort? Let us know in the comments.

If you want to visit Disneyland or Walt Disney World on your next family vacation but aren’t sure where to begin planning, then don’t hesitate to reach out to our friends over at the Authorized Disney Vacation Planners at Academy Travel for a free quote.