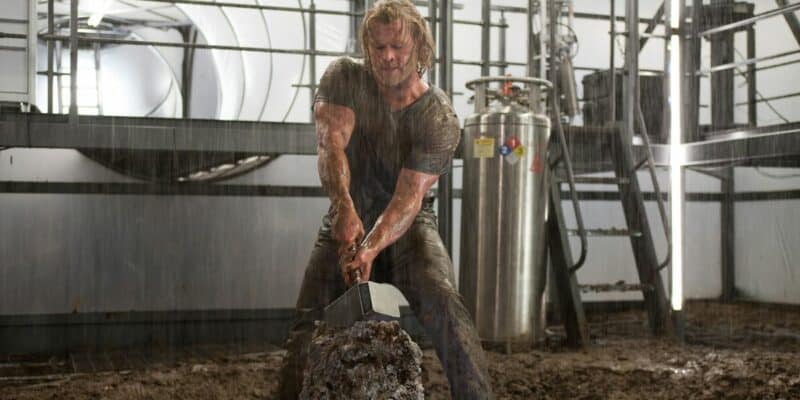 The official D23 Twitter released the following promotional tweet and image for this brand-new character greeting experience at the Disneyland Resort:

EAT MY HAMMER The Mighty Thor, a.k.a. Dr. Jane Foster has taken the bifrost to Avengers Campus at Disney California Adventure Park! #ThorLoveAndThunder

Along with this new character arriving at the Disneyland Resort, and with general hype surrounding Taika Waititi-directed Thor: Love and Thunder‘s opening weekend, there has been a marked increase in fan discussion swirling around the Disneyland Park’s major vehicle for MCU-related character experiences and photo-ops — the Avengers Campus.

And with this increase in attention to Avengers Campus and Marvel in general, Some Disney fans noticed a glaring opportunity that the Walt Disney Company missed entirely.

Twitter user @somestuffisaid commented on this obvious omission, posting the following tweet that has garnered almost 2,000 likes at the time of writing:

How did Disney not do this in Avengers Campus?

How did Disney not do this in Avengers Campus? pic.twitter.com/IvKCB79bRK

The post calls Disney out with two simple images for not connecting these seemingly obvious dots together — one image is of the now (in)famous Sword in the Stone monument located in Disneyland Resort’s Fantasyland, and the other is a screenshot of then-unworthy Thor (Chris Hemsworth) attempting to pull a stuck Mjolnir hammer from a rock — taken straight from the Marvel Cinematic Universe’s first Thor adventure, the eponymous Thor (2011).

Cuz they did the bare minimum

Cuz they did the bare minimum

Money issues. They would have to raise the prices AGAIN to put this.😁

Money issues. They would have to raise the prices AGAIN to put this.😁

However, some eagle-eyed (and likely, European) fans like @AlyTheMouse have pointed out the existence of a similar photo-op spot in Disneyland Paris’ official Disney Branded Hotel, Disney’s Hotel New York: The Art of Marvel:

They kinda have it in the Hotel new york: The Art of Marvel hotel in Disneyland Paris!!!

They kinda have it in the Hotel new york: The Art of Marvel hotel in Disneyland Paris!!! pic.twitter.com/JgDT8yfbMF

In a bizarre twist of fate, in barely a day, the Mighty Thor and Thor were actually spotted in Disneyland Resort’s Avengers Campus, chatting to Guests and kids — and most importantly, giving Guests a shot at picking up Thor’s mighty hammer of myth and legend — Mjolnir:

Although this chance to wield the God of Thunder’s mighty weapon and prove oneself worthy of the power does not exist in the same way as Fantasyland’s Sword in the Stone’s opportunity to get crowned “King of Fantasyland” does. Instead, Guests must prove their mettle only if Thor explicitly allows it — which checks out, considering how precious he was proven to be with it in Thor: Love and Thunder.

Thor and the Mighty Thor both casually carry and throw Mjolnir around while meeting and greeting Park visitors — until they decide to let a Guest try their hand at lifting it. At this point, they place it down on the rocky outcropping behind them, that most likely conceals some sort of strong electromagnet or device to lock the hammer in place.

The Guest is then allowed to try (and fail) to lift the hammer before Thor eventually “finds” someone (usually, a child) to “succeed” at lifting it — however the kid is usually raising the hammer together with Thor himself — hinting that perhaps, he’s ultimately just humoring the Guest with a “successful attempt”.

This is actually a rather clever approach to a Sword in the Stone-style photo-op — as Cast Members are always around to ensure that visitors aren’t damaging the props — but most importantly, that they keep in line with the current Marvel Cinematic Universe canon and lore, by keeping the number of Mjolnir-wielders believably low.

In the MCU, the one-of-a-kind hammer has only been lifted by a select few “worthy” individuals — apart from Thor himself, other characters who’ve successfully lifted Mjolnir are Vision (Paul Bettany), Steve Rogers’ Captain America (Chris Evans) and as of Thor: Love and Thunder, Jane Foster as the Mighty Thor.

If Disney allows (eventually) hundreds of random Guests to successfully lift Mjolnir, that might diminish the uniqueness of the weapon and the “specialness” of its power in fans’ minds  — although being able to actually raise the weapon in the middle of a busy Disney Park would make for the most amazing bragging rights.

What do you think about this “missed” opportunity? Do you prefer the experience tied to a character meet and greet, over just a standalone photo-op? Comment down below with your thoughts!