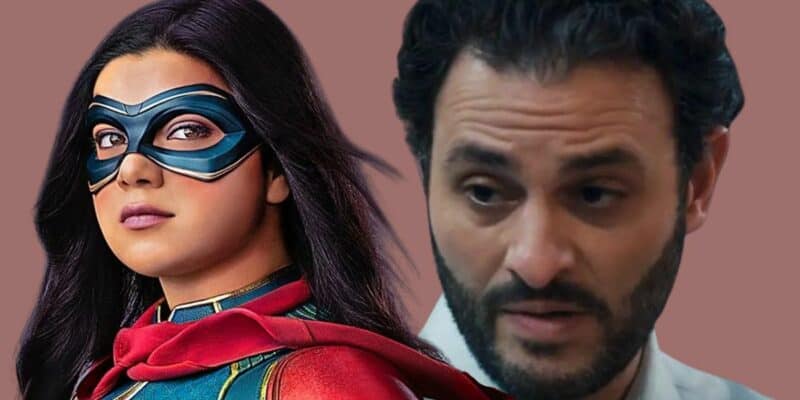 Ms. Marvel starring newcomer Iman Vellani as Kamala Khan/Ms. Marvel is now streaming on Disney+. Fans of Marvel Comics have complained since before the first trailer dropped about the controversial change to Ms. Marvel’s powers, and others took to review bombing the series before it was released. But the pros outweigh the cons as Marvel fans try to figure out how Ms. Marvel fits into the rest of the Marvel Cinematic Universe.

Much like Moon Knight starring Oscar Isaac as Marc Spector/Steven Grant/Jake Lockley/Moon Knight, Ms. Marvel started out as a stand-alone series that did not focus on characters introduced in previous Marvel movies. But slowly, Ms. Marvel has made more connections to the Marvel Universe, including references to Scott Lang/Ant-Man’s (Paul Rudd) podcast and an easter egg referencing Shang-Chi and the Legend of the Ten Rings.

But one of the biggest references came in the first episode’s post-credit scene, which featured Damage Control Agent P. Cleary (Arian Moayed) and Agent Sadie Deever (Alysia Reiner from Orange is the New Black).

So, fans may be wondering what exactly is the Department of Damage Control in the Marvel Cinematic Universe?

What is Damage Control in the MCU?

The Damage Control began as a subsidiary of the Strategic Homeland Intervention, Enforcement, and Logistics Division (SHIELD). It was involved in cleaning up the battle between Tony Stark/Iron Man’s (Robert Downey Jr.) and Obadiah Stane/Iron Monger (Jeff Bridges) in Iron Man (2008).

The Department of Damage Control (DODC) first played a big part in the MCU in Spider-Man: Homecoming (2017). They were split from SHIELD as part of a joint venture with Stark Industries and the United States government to help clean up the damage to New York City caused by Earth’s Mightiest Heroes fighting Loki (Tom Hiddleston) and the Chitauri during the events of The Avengers (2012).

However, what started as a good intention became a problem for Peter Parker/Spider-Man (Tom Holland). This is how many of Tony Stark’s good intentions have turned out in the Marvel Universe. Adrian Toomes/Vulture (Michael Keaton) was originally salvaging the wreckage from the Battle of New York, and when Damage Control took over, he lost his livelihood and turned him to a life of crime.

Peter Parker ended up trapped in a Damage Control facility during Homecoming. At the time, they were responsible for collecting and storing the dangerous alien artifacts left by the Chitauri Invasion. However, by 2024, the Department of Damage Control had transitioned into a federal law enforcement agency tasked with apprehending enhanced individuals and seizing dangerous and alien artifacts.

Therefore, during the events of Spider-Man: No Way Home (2021), they act more like the Marvel Universe’s cops than a construction crew. They were tasked with arresting Peter Parker for killing Quentin Beck/Mysterio (Jake Gyllenhaal). They have stepped up to replace SHIELD after it collapsed during Captain America: The Winter Soldier (2016).

How does Damage Control fit into Ms. Marvel?

Since the Department of Damage Control now has jurisdiction over super-powered people in the Marvel Cinematic Universe, it’s no shock that they are showing up in Ms. Marvel. Kamala first got her powers at New Jersey AvengerCon, and Kamala’s classmate Zoe Zimmer (Laurel Marsden) posted the footage to the internet.

In Ms. Marvel, Agent Cleary once again puts his interrogation skills to use. Just like with Ned Leeds (Jacob Batalon), he can quickly trick Zoe Zimmer into giving them information about the hero she calls Night Light.

Damage Control has even begun using the drones they took from Peter Parker in No Way Home. The EDITH drones ambushed Ms. Marvel after her first attempt to be a superhero at the mosque. The way Agent Deever treats the Muslim characters in Ms. Marvel is a reference to real-world surveillance that the FBI has done on Muslim-Americans for years.

What was changed about Damage Control from Marvel Comics?

Marvel fans have been divided about Damage Control in the MCU. Since No Way Home, they have abandoned their original purpose and no longer resemble their Marvel Comics origins. Damage Control was created by Dwayne Mc Duffie and Ernie Colon and first appeared in Marvel Comics Marvel Age Annual #4 (1988) by Chris Claremont.

Damage Control is a construction company founded by Anne Marie Hoag and was initially owned by Tony Stark and Wilson Fisk/Kingpin. Damage Control specializes in repairing the property damage caused by conflicts between superheroes and super-villains.

Their solo comic book, Damage Control (1989), was a four-issue mini-series that portrayed them more as workplace comedy than as police officers. The first issue is described as:

“An Acts of Vengeance crossover! John, Gene, and Bart are trapped in the maximum security wing of The Vault. Meanwhile, Damage Control is sold to a multi-national corporation. And that’s the good news!”

Damage Control would go on to have more whacky misadventures, such as confronting Victor Von Doom/Doctor Doom over an unpaid bill and being threatened with death by the Punisher. They have met vastly powerful cosmic entities such as the Silver Surfer and Galactus. And they talked the New Warriors and the Hulk out of fighting each other in the middle of Yankee Stadium.

This vast difference is why fans of Damage Control do not like how they are being used in the MCU during Phase Four. Ali says:

damage control in ms marvel THEYVE DESTROYED MY PEOPLE MASSACRED THEM THEY MADE THEM COPS pic.twitter.com/Y23o8AFCcK

It seems baffling that Kevin Feige’s Marvel Studios turned Damage Control into cops when there was already a perfect government agency in Marvel Comics that would have fit right in – Child Hero Reconnaissance and Disruption Law Enforcement or CRADLE.

CRADLE was introduced in a Ms. Marvel storyline and first appeared in Outlawed #1 (2020) by Eve Ewing and Kim Jacinto. When Kamala Khan’s team of young superheroes, Champions, battled an Asgardian Dragon during War of the Realms, they destroyed Coles Academic High School. Kamala was left in a coma, and when adults learned teenagers were responsible, the Underage Superhuman Welfare Act AKA “Kamala’s Law,” was passed to ban anyone younger than twenty-one from being a superhero.

They began rounding up and arresting young heroes like 9-year-old Lunella Lafayette/Moon Girl and locking them up in Re-education Centers. The Champions like Ms. Marvel, Nova/Sam Alexander, and Spider-Man/Miles Morales escaped when Cyclops/Scott Summers granted them asylum on the mutant island of Krakoa.

Marvel Studios has made many changes from Marvel Comics over the years for simplicity. Perhaps they are planning on using CRADLE later in their Young Avengers project. But this is a slight change in the face of the controversial power changes.

Do you want to know more about Damage Control, and how do you think they will fit into the rest of Ms. Marvel and the future of the Marvel Cinematic Universe?

Comments Off on The Secret Truth Behind Damage Control in ‘Ms. Marvel’