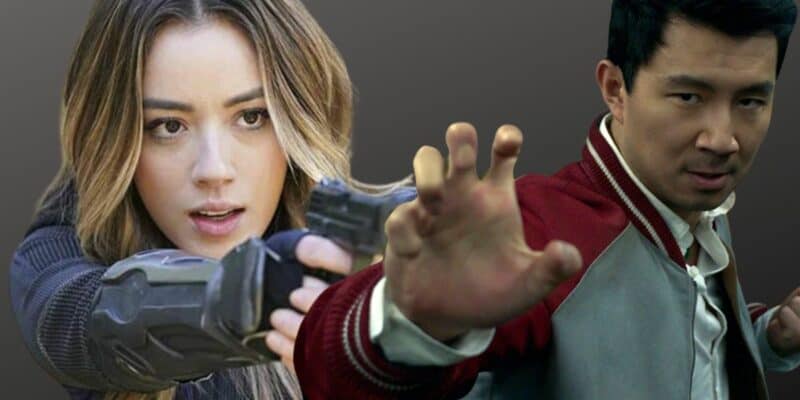 Chloe Bennet is best known for playing Skye/Daisy Johnson/Quake on ABC’s Agents of SHIELD. Marvel fans have been begging for the Inhuman superhero to return to the MCU even as Marvel Studios Kevin Feige cautiously tip toes around whether the beloved Marvel Television series is canon to the Marvel Cinematic Universe. Meanwhile, Chloe Bennet is not about to let Simu Liu (Shang-Chi from Shang-Chi and the Legends of the Ten Rings) steal her glory as the real first Asian superhero.

Simu Liu made headlines when he starred as Shang Chi in Shang-Chi and the Legends of the Ten Rings (2021). He campaigned for the role on Twitter, and after numerous delays caused by the COVID-19, Simu Liu had to do most of the marketing for the Marvel movie on his social media.

Marvel fans were delighted that after a decade, an Asian American superhero would be the focus of a Marvel Cinematic Universe film. But every fan of Agents of SHIELD knows that while he was the first Asian superhero to take center stage on the big screen, he was not Marvel’s first live-action Asian superhero.

That honor belongs to actress Chloe Bennet, whose father is Han Chinese and whose mother is Caucasian American, was the lead superhero on Phil Coulson’s (Clark Gregg) team on Agents of SHIELD. And she won’t let anyone – even Simu Liu – take that mantle from her.

In a recent post to Twitter, Chloe Bennet shared a picture of her with Simu Liu, saying:

The thread quickly took off with praise for Chloe Bennet, Daisy Johnson, Simu Liu, and Shang-Chi. Fans are now begging for Quake’s return to happen in Shang-Chi 2. It has been rumored she could cameo in Secret Invasion, which will follow former SHIELD director Nick Fury (Samuel L. Jackson) as he tries to stop a Skrull invasion.

Destin Daniel Cretton’s Shang-Chi 2 is in the works, but there have been no plot details released. It is expected to premiere in 2024 or 2025. Awkwafina, who plays his best friend Katy, Meng’er Zhang as Shang-Chi’s younger sister Xu Xialing, and Michelle Yeoh as Ying Nan could return. But Tony Leung as Shang-Chi’s father Xu Wenwu, and Fala Chen as Shang-Chi’s mother, Ying Li, will not.

Shang-Chi also had a couple of surprise appearances, one by Benedict Wong as Wong the Sorcerer Supreme and the other by Ben Kingsley, who reprises his Iron Man 3 role as Trevor Slattery, and either could return for the sequel.

Let us know in the comments if you want Chloe Bennet’s Daisy Johnson/Quake to team up with Simu Liu’s Shang-Chi.