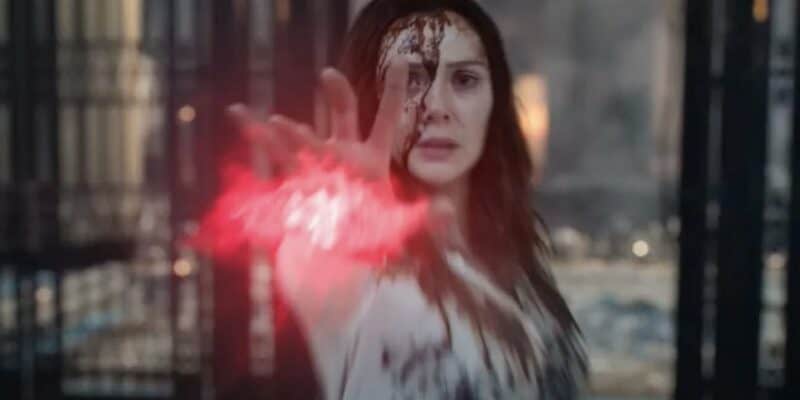 The Marvel Cinematic Universe will never be the same after director Sam Raimi introduces the mind-bending Doctor Strange in the Multiverse of Madness (2022). But, a terrifying new clip of Elizabeth Olsen’s Wanda Maximoff is freaking fans out.

Every Marvel fan was on high alert of Marvel Studios reportedly releasing a new TV spot for Doctor Strange in the Multiverse of Madness a few days early. Since then, the advertisement has gone officially public, but a new clip of Wanda Maximoff/Scarlet Witch (Elizabeth Olsen) scares fans.

Sam Raimi is a master of horror and superheroes, perfectly blending the two into the upcoming Doctor Strange sequel. The Evil Dead (1981) director is putting his subtle horror hints to the test with his new Marvel movie and this new clip of Wanda Maximoff breaking the fourth wall and slowly looking into the camera suggests something more significant than most will realize:

When you’re watching #MultiverseOfMadness then Wanda breaks the fourth wall and chooses you as her next victim.

When you’re watching #MultiverseOfMadness then Wanda breaks the fourth wall and chooses you as her next victim. #ScarletWitch pic.twitter.com/wC6FGkg1eo

In the clip above, the superhero Wanda Maximoff has stepped back into her WandaVision home as she traverses the Multiverse for her children, Billy, and Tommy Maximoff.

Nonetheless, something shocks the Scarlet Witch to the core, resulting in her slowly and Norman Bates-like turning into the camera, staring directly into the lens and subsequently into the audience’s heart.

With Wanda going on a bloody rampage and reported “killing spree” throughout the headquarters of the Illuminati to consume the powers of America Chavez (Xochitl Gomez), fans are accepting the fact that Maximoff might even target the audience (or perhaps Professor X or The Watcher):

I will happily accept my demise

I will happily accept my demise

I think this is when her variant figures things out about the Illuminati and goes to face them. Boy are they going to get whooped

I think this is when her variant figures things out about the Illuminati and goes to face them. Boy are they going to get whooped 🔥

In WandaVision, we watched her. In MoM, she watches us!

In WandaVision, we watched her. In MoM, she watches us! 👀

Now that everything is changing with Multiverse of Madness, it’s entirely possible that Wanda Maximoff interacts with the crowds and changes the game of Marvel.

Somewhat like Wade Wilson/Deadpool (Ryan Reynolds) talking to the camera, the Scarlet Witch is out for blood as she searches for her lost family. While it’s likely she’s sensing the Illuminati watching her, it’s evident that fans are in for a treat with Doctor Strange!

Which characters will Wanda Maximoff kill in Doctor Strange? Let us know in the comments below!