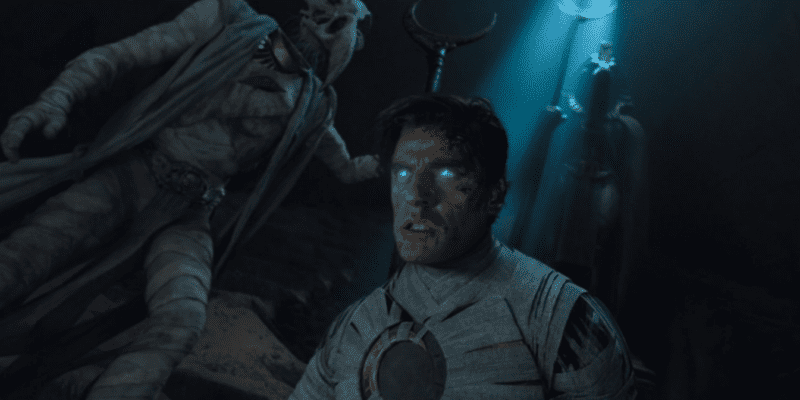 It seems that Marvel isn’t done making dramatic changes for super heroes that enter the MCU.

So far, Oscar Isaac’s Moon Knight has done a great job at staying true to the comics. This episode spent most of the episode trying to understand Moon Knight’s dissociative identity as the hero has multiple personalities. Fans were surprised to see the Hippo Goddess, Tawaret, as it left a huge cliffhanger for Episode 5. Now fans know that if Marc and Steven are going to make it out alive, they need to learn about their past in order to balance the scales.

This allows fans to finally understand how Steven is created as it is revealed that Marc used Steven to help him get through the hardships of an abusive mother after he accidentally led his younger brother, Randall, to his death in a cave. Steven Grant is based on a VHS tape that Marc would watch of an archaeologist that was shown in Episode 4.

While this made a compelling explanation as to why Marc created Steven, it is very different from the comics. For instance, Randall isn’t accidentally killed by Marc in the comics. Instead, Marc tries to protect his brother at school and deals with his father who gets upset whenever he resorts to violence. It’s revealed that Marc’s father is a Rabbi and a very religious man who survived the holocaust so he doesn’t believe anyone should use violence.

Obviously, the MCU couldn’t make his father a direct survivor of the holocaust, but it could’ve still served as the reason why his father didn’t believe in violence. Another reason why Marc eventually created his other identities was because one of his father’s friends, Rabbi Yitz Perlman, is revealed to be a sinister Nazi deserter who still hunts and kills Jews. After Marc learns the truth about Yitz, Marc learns his real name is Ernst and he ends up creating his other personalities after that traumatic experience.

Steven Grant is created so that Marc has a safe place to be, and Jake Lockley is created so that Marc can always know what is happening around him. This helps the hero handle his different fears and is the hero’s original explanation for how he got his other personalities. It’s fine that the MCU changed how Marc got his powers, but now it seems that Marvel would rather have an abusive mom take the place of a Nazi deserter.

This change may be more relatable to fans, but not everyone deals with DID, and Ernst was a good explanation as to why Marc’s third personality is created because it helps make it clear why he is so paranoid because he doesn’t know if Ernst is going to hunt him down and kill him. This fear subsides as he gets older, but the hero does end up facing his childhood nightmare once more and does end up saving the day.

It’s frustrating that Marvel has decided to make Spector’s Jewish heritage more of a set-piece and not really acknowledge that his father is a Rabbi as that plays a big part in why Marc is religious in the comics. His Jewish heritage is a big deal and even though Moon Knight does a great job showing that Marc is Jewish, they fail to make it more of a focus when it came to explaining his early life.

Now, it will be hard to see where Moon Knight will go as there is only one more episode before the limited series ends. Even though the series has teased the third personality for Marc, it will be hard to explain why Marc felt the need for a darker side with Ernst being replaced by his mother in the series.

Do you think Marvel made the right with Marc’s backstory? Let us know what you think!

Phase Four has started off with a lot of content for Marvel fans to look forward to in the Marvel Cinematic Universe. On Disney+  you can expect more episodes of  Moon Knight,  Ms. Marvel on June 8, and She-Hulk to debut this year. For movies, Doctor Strange In the Multiverse of Madness comes out on May 6, followed by Thor: Love and Thunder on July 8, and of course, Black Panther: Wakanda Forever on November 11.