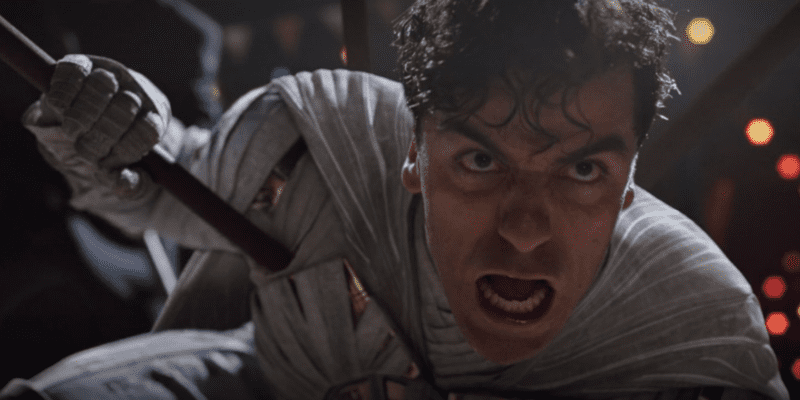 Oscar Isaac‘s performance as the different personalities of Moon Knight has been fantastic.

Fans have been enjoying the MCU series as it blends mystery, espionage, thriller, horror, and adventure all into one show. One of the reasons why Moon Knight isn’t easy to watch is because the character struggles with Dissociative Identity Disorder meaning that the hero has several personalities. Fans have already met Steven Grant the gift shop clerk, and also Marc Spector the mercenary with Marvel teasing that a third personality is present.

Spector made a deal with the Moon god, Khonshu to have a new chance at life and in exchange, he becomes the god’s avatar — his personal servant. Fans quickly learn that Khonshu is trying to stop Arthur Harrow (Ethan Hawke) from awakening Ammit, one of the other Egyptian gods and that means that Spector is sent to stop Harrow from doing this.

The end of the episode ends with Khonshu shockingly sacrificing himself to give Spector and Layla the knowledge of where Ammit’s tomb is. The other gods trap Khonshu in a stone figure where the god is now powerless. This means that Marc’s powers as Moon Knight are now gone. So fans have just gotten to see Moon Knight in action and now it seems that the hero won’t be able to use his abilities anymore.

Fans may think this will only be the case for one episode, but do remember that the series has already given fans very little time with seeing the hero in the suit. The first episode only gave fans a small brief scene. The second episode gave fans a lot more action, but it has only been a fraction of the screen time. Now it seems that Episode 4 won’t have any Moon Knight as the only way to get his abilities back would be to free Khonshu which won’t be easy to do.

With the gods securing Khonshu in the pyramid of Giza, it seems that Spector will have to use his mercenary skills to save the day. While some fans may be fine with this, it will be a bummer to not see more of the suit. While other iterations of the character have Moon Knight use his abilities even if Khonshu is imprisoned or trapped, it seems that the MCU is making it clear that the god must be free in order for his powers to work.

Fans can expect that next week will focus a lot more on Marc’s backstory and perhaps gives fans a better look at what the future of Moon Knight will look like as it seems that the superhero abilities are suddenly no longer part of the series.

Do you believe Marc will get his powers back in the series? Let us know what you think in the comments section below!