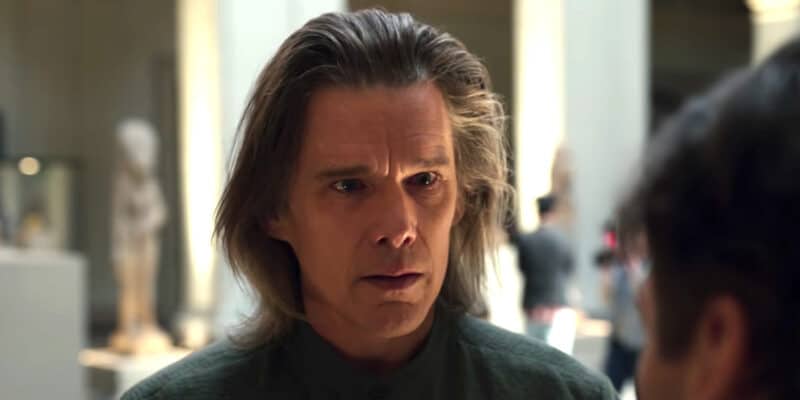 Marvel fans are excited for Oscar Isaac’s Moon Knight as this will be one of the first MCU shows to really explore one of Marvel’s complex superheroes.

Moon Knight suffers from dissociative identity disorder, and his other personalities, Marc Spector/Steven Grant have made some enemies over the years, such as Arthur Harrow. While most fans may know Moon Knight from the memes asking where Dracula is, it will be interesting to see the supernatural side of the Marvel Cinematic Universe as Moon Knight will explore the Egyptian gods and also the Moon God, Khonshu.

Who will Ethan Hawke play in Moon Knight?

Ethan Hawke will be playing Arthur Harrow in the upcoming Marvel show. In the comics, Harrow is described to be a scarred man as his face is disfigured due to a condition he was born with. He is a scientist whose research focused on pain theory. Due to his hard work, the scientist was nominated for a Nobel prize in medicine. Despite having a great reputation as a scientist, Dr. Victoria Grail began to suspect that Harrow’s research may have gone too far as she believed Harrow was testing on humans instead of animals. Dr. Grail found documents tracing Harrow’s research to Auschwitz, so she objected to Harrow’s Nobel nomination.

The documents were supposed to be destroyed but disappeared with the help of another organization O.M.N.I.U.M. who recruited Arthur Harrow. Dr. Grail suspected that the research was ongoing and went to confront Harrow about his research.

Ethan Hawke’s portrayal of the character isn’t scarred and also doesn’t appear to be a scientist that fans are used to seeing. Harrow is described by Hawke to be more like David Koresh — an infamous cult leader — who was an inspiration for the character. Another inspiration would be Carl Jung, a Swiss psychiatrist who was well known for his research and a respected individual in several fields.

Arthur Harrow isn’t known to have any superpowers but he is very intelligent. He is a talented surgeon and his research has made him a valuable asset for certain organizations. Even though Arthur Harrow may not have any abilities, his knowledge in other fields makes him a very dangerous foe as he is knowledgeable in archaeology, history, astrology, and biology.

What is Arthur Harrow’s Weakness?

Arthur Harrow suffers from a rare disease called Trigeminal Neuralgia which paralyzed half of Harrow’s face into a permanent snarl and causes him extreme pain. Part of Harrow’s research is to cure himself of this agonizing pain, but this is why the scientist always looks angry in the comics.

Arthur Harrow’s research must have caught Khonshu’s attention because, in the comics, Moon Knight only learns of Harrow from the vision he received from the Moon God.

It happens when Marc Spector is driving an automobile and Khonshu overwhelms him with a vision showing Arthur Harrow, one of his test subjects, Dr. Grail, and a pyramid. Marc went on his way to find Harrow since he had to obey Khonshu, the god who gave him his powers.

O.M.N.I.U.M. learned that Dr. Grail was in Yucatan, so they sent some men to go kill her and while she was held at knifepoint, Marc spotted them and transformed into Moon Knight. The hero went to save Dr. Grail and then they teamed up to find Harrow’s lab. At first, Dr. Grail was hesitant to work with Moon Knight until he asks about the scarred man — referring to Arthur Harrow — which leads the scientist to trust the superhero.

As Arthur Harrow ends up escaping, his research is discovered by Moon Knight and Dr. Grail. Harrow had been testing on humans as he had test subjects who no longer felt pain. This meant that when they fought Moon Knight, the test subject could fight with broken bones because the subjects didn’t feel pain. This was an obstacle for the hero as he couldn’t kill the test subjects, but in the end, Moon Knight prevailed and saved the day. After this encounter, Arthur Harrow wasn’t heard from again leaving the villain to appear to be forgotten.

What role will Arthur Harrow have in Moon Knight?

Arthur Harrow will most likely be the villain in the series. Ethan Hawke has spent some time discussing how he was drawn to play this character despite normally denying any role that would require him to play the bad guy. Since Arthur Harrow is seen as a cult leader in the trailers, it has led many people to wonder what the cult is and what Harrow is up to.

Harrow’s role in the series may not be one-dimensional as his cult may be dedicated to Khonshu, the Moon God. Harrow might believe he is the better servant to Khonshu compared to Moon Knight leaving the two characters to be at odds with each other.  It’s possible the MCU may use Harrow’s research on pain tolerance to allow him to create another army of test subjects to fight Moon Knight and test his abilities.

In the end, Moon Knight will fight Arthur Harrow because Khonshu has told the character to do so. For some reason, the Moon God doesn’t like Arthur Harrow which is why he gave Moon Knight a vision to hunt down the mad scientist. Of course, the comics won’t be completely adapted into the series, but some parts have already been seen in the trailers. Marc Spector seems to wake up in a van he is driving as if he were asleep which could be the scene after the hero receives the vision.

Khonshu can be seen behind Marc Spector in another shot in the grass which could be the vision sequence itself. Another shot from one of the trailers shows a pyramid with purple lightning which could mean that Harrow’s lab will be in the pyramid. Harrow can also be seen walking in a grand hallway of what appears to be inside a pyramid.

These small moments of the trailers seem to be leading up to the fact that the two characters will end up fighting despite the trailers making some fans believe that maybe Arthur Harrow could be helping Moon Knight. Some fans believe that Arthur Harrow could be trying to help Moon Knight as the character says in the trailer, “There’s chaos in you. Embrace the chaos.” If there is anything you should know about Harrow, it’s that you shouldn’t trust the character as he will most certainly be a villain in the upcoming Marvel show.

On Disney+  you can expect Moon Knight on March 30, Ms. Marvel in Summer 2022, and She-Hulk to debut this year. If you are a fan of the Netflix Marvel shows such as Daredevil, The Punisher, Jessica Jones, Luke Cage, Iron Fist, and The Defenders, you can find those on Disney+ starting on March 16.

Comments Off on Who Is Arthur Harrow In ‘Moon Knight’?