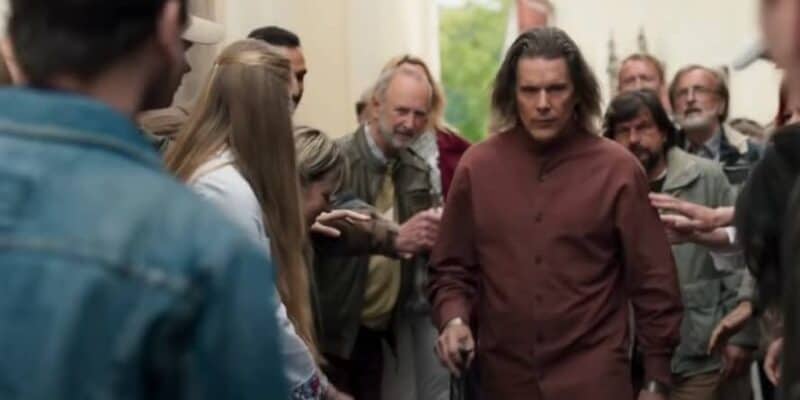 Without Oscar Isaac, Ethan Hawke, an Oscar-nominated actor set to play Arthur Harrow in Moon Knight wouldn’t have joined the MCU. Ethan Hawke has had a love for comics his whole life, but saw actors like Jack Nicholson play the villain and then become cast to only be the bad guy and he didn’t want to join the club. When talking to another source he described this as:

“I’ve always had this theory that when you teach an audience how to see the demon inside you, they don’t unsee it for the rest of your career.”

When he met Star Wars alum, Oscar Isaac, in a coffee shop and told him his love for comics, Isaac asked him to join Moon Knight and the rest was history. Now, Ethan Hawke is playing a new iteration of Arthur Harrow, a mad scientist in the comics who was an expert in pain theory. Hawke was able to share his inspiration through another in a recent interview:

Psychiatrist Carl Jung and infamous cult leader David Koresh were among the inspirations for his performance. “Your gut leads you,” he explains. “The uber-rich villain mastermind isn’t interesting to me. I love the ones who believe that they’re a good person and that’s why they have to kill you. That, I find really terrifying.”

Carl Jung as an inspiration makes sense since he was a Swiss psychiatrist who was well known for his research which is similar to Arthur Harrow’s character in the comics as Harrow is rewarded a Nobel Prize for his research. David Koresh is an inspiration that can be noticed in the trailer as Ethan Hawke’s character has already built a cult following and this may be one of the ways to further connect Moon Knight to Hawke’s character as perhaps Khonshu the Moon God doesn’t like Arthur’s cult and wants him taken care of just like in the comics.

Hawke once shared that his favorite thing about the Marvel Cinematic Universe is origin stories:

“And with Moon Knight, we get to create a world and a character. The fan in me always enjoys the first movie. I love learning about how the hell Captain America came to be — those are my favorite parts of the story.”

Who do you think Ethan Hawke’s character will be like? Let us know in the comments below!