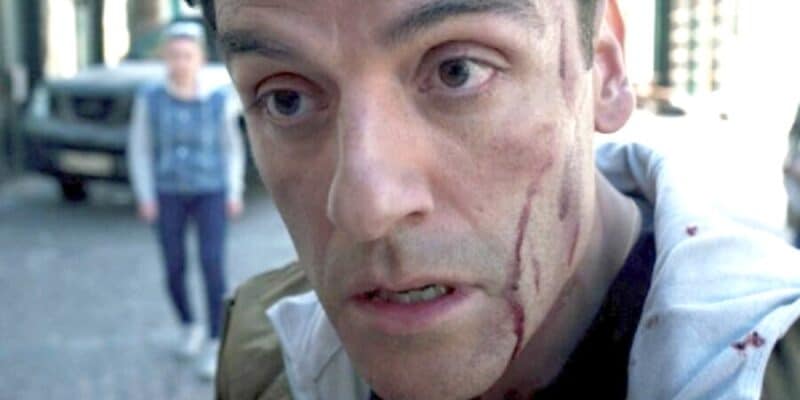 Moon Knight still has over a month before release, but new merchandise has given us another look at the character.

The newest MCU show will debut on March 30 and has fans excited after seeing the trailer. With Marc Spector/Steven Grant/Moon Knight’s Dissociative Identity Disorder and Egyptian gods, this show may be Marvel’s weirdest and tense show up to date. Oscar Isaac, Star Wars alum, is starring as Moon Knight and has Ethan Hawke play Arthur Harrow, who in the comics is one of Moon Knight’s antagonists. It seems that the show will lean into the unreliable side that is offered from Grant shifting from one identity to the other and not knowing what has happened in between leaving him in dangerous situations. From here, it is safe to assume that the action scenes for this show will be unlike what we have seen before in the MCU as Moon Knight is also supposed to be grittier than previous Marvel movies or shows and some fans are curious if it will be comparable to Daredevil or The Punisher from Netflix.

Merchandising has given fans another look at Moon Knight with promo art that is reportedly for a t-shirt and a long sleeve. Here are the images:

Related:’Moon Knight’ Star Barely Made It Into the MCU

Both of the designs showcase symbols from Egyptian mythology which could be a hint of how big of a role the Egyptian gods will play in the series. Moon Knight has always had a focus on Egyptian gods and elder god, Khonshu, but with the MCU known to adapt comics to fit with the Marvel Cinematic Universe, it wouldn’t have been a surprise if fewer of them appeared. Khonshu being an Elder god predated the world and was later included in Egyptian Mythology. The Moon Knight trailer did show Moon Knight having an interaction with Khonshu the Moon god and Anubis, the god of the dead. Khonshu appears walking down the hallway and then when the elevator door opens, a lady walks in instead of the Moon god. Anubis can be seen being beaten up by Moon Knight himself which leaves up the question to be whether or not some of the Egyptian gods will be the main villain.

Ethan Hawke’s character, Arthur Harrow could be working directly with one of Khonshu’s rivals, and Moon Knight is then pitted against another Egyptian god as Khonshu’s champion. Of course, all we do know is that Arthur Harrow will be one of the antagonists in the show, but how much influence the Egyptian gods have is still uncertain. Another interesting thing to point out is that Moon Knight has blue eyes in the promo art and yet he appears with white eyes in the trailer. Will Moon Knight have his eyes change color? It’s something to consider but it could easily be that it was more visually appealing as the eyes would be visible and not blend into his white attire.

Moon Knight is a complex superhero. He deals with Dissociative Identity Disorder on top of having to deal with Egyptian gods. Marvel describes the superhero as:

Moon Knight can also be setting up the foundation for a new superhero team to take on the weirder conflicts that the supernatural side of the world brings. This group is called the Midnight Sons and has had Ghost Rider, Blade, The Punisher, Doctor Strange and of course, Moon Knight fighting off demons or other paranormal creatures that threatened the world.

Do you think Moon Knight will have a lot of Egyptian mythology? Let us know in the comments below!

If you want to keep up to date with Marvel’s Phase Four then you should consider watching Chloe Zhao’s Eternals, Scarlett Johansson’s Black Widow and the five series on Disney+ so far — Elizabeth Olsen and Paul Bettany’s WandaVision, Anthony Mackie and Sebastian Stan’s The Falcon and the Winter Soldier, Tom Hiddleston’s Loki, Marvel’s What If…?, and Jeremy Renner’s Hawkeye— on Disney+ anytime.