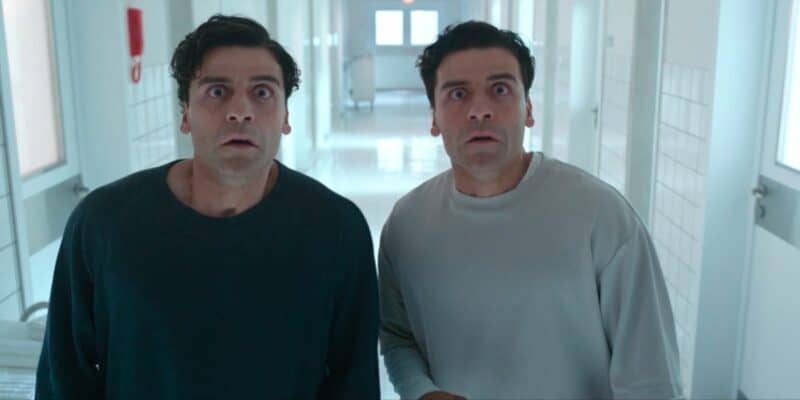 Oscar Isaac’s Moon Knight faces a shocking turn of events as he is shown to have woken up in a mental ward even though he was just shot seconds beforehand.

Surprisingly enough, Marvel has been teasing this twist in the trailers, as they have decided to follow Jeff Lemire’s run of Moon Knight. In the comics, Marc Spector wakes up in a mental ward and is told that his life as Moon Knight and his other personalities are just projections of his mind and can only be treated as fiction. This drives Marc crazy as he knows something is up and he runs away. This allows the sedative to run out and he finds the staff to be Jackals working for Ammit who ends up being the psychiatrist.

Does any of this ring a bell?

For Moon Knight, it seems that it’s going around the same for Marc as he wakes up and doesn’t have Steven to talk to. People from his life are also in the mental ward such as Crawley (the Statue guy Steven talks to), Donna (Steven’s old boss), Layla, Arthur Harrow as the psychiatrist, and the one bearded guy who gets killed by one of Horus’ guardians.

The show reveals that Marc is struggling to receive help from Harrow and after seeing several details from his life, Marc makes a run for it. He finds Steven in a tomb and frees him leaving the two of them in separate bodies. They encounter another tomb where they find someone trying to get out, but decide to leave it be. This third tomb most likely is Jake Lockley, Marc’s other iconic personality.

Jake Lockley’s presence was also hinted at again by Crawley’s cameo in the ward. In the comics, Crawley helps Marc remember who he is so it would be interesting to see if Crawley will do this again, but fans don’t know what to expect from the character just yet.

How is Marc alive?

Related: Marvel Has Replaced A MAJOR Character In New Series

In the comics, they had the ward set in another plane of existence. In Episode 3, Khonshu made reference to the Othervoid, the god’s sanctuary between time and reality. It’s possible the ward could be set there and that the Hippo Goddess shown at the end of the episode would be Tawaret, the Egyptian goddess of protection and fertility.

Most likely Marc ended up in the ward once Ammit was reawakened leaving Marc to be placed in a place fit to help him. Since Harrow has shown a lot of interest in trying to help Marc, it isn’t unlikely that the facility is meant to help restore him back to his usual self after nearly dying again. It’s possible that since Marc is the avatar of Khonshu, he is more valuable alive as the Moon god could end up having a larger role in the last two episodes.

It wouldn’t make sense for Ammit or Harrow to truly kill Marc since they would see him as a misguided man who is deeply troubled.  After he leaves the Othervoid or wherever the ward is, Marc’s other personalities should reenter his mind and not be separate people as shown.

What’s the deal with Ammit and Harrow?

As mentioned above, Harrow definitely has reawakened Ammit and has won. This is how it was in the comics except it was supposed to be Seth, but it seems that Moon Knight is changing things up. The comics had Ammit herself acting as the psychiatrist, but it seems that Harrow has taken the role. This makes sense as the MCU forces gods to only be physically active for the most part if they have an avatar. Khonshu and Tawaret are the only two exceptions so far.

It will be interesting to see where Moon Knight goes, but the series is definitely steering away from the super hero antics as the mental ward scenes will focus more on Marc’s other personalities and who he truly is rather than getting him back his powers. Fans should expect to see more of Khonshu and be expecting a new villainous plan to be revealed soon as Moon Knight will have to thwart whatever Ammit has planned for the world.

Which familiar characters did you see in the mental ward scene?  Let us know what you saw in the comment section below!