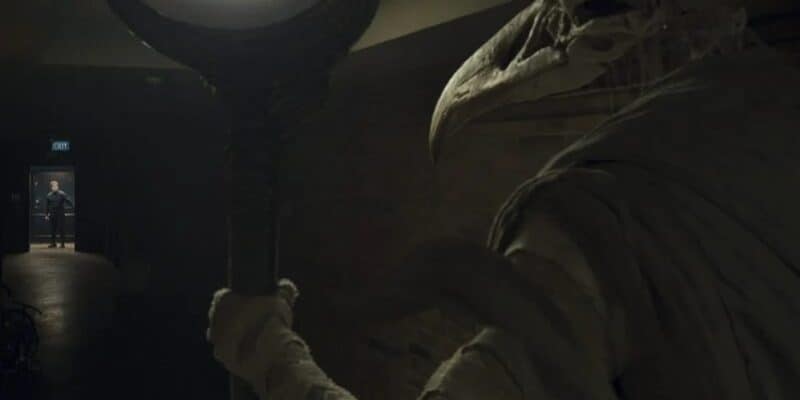 The first episode of Moon Knight has dropped and it did not disappoint. Isaac’s performance as Steven Grant/Marc Spector/Moon Knight was wildly entertaining as the episode focused mostly on Steven Grant’s life. His character suffers from Dissociative Identity Disorder meaning that Steven is one of the many personalities in his body. Marc Spector and Moon Knight are other personalities who try to take over at certain points during the episode.

This is why Steven would blackout and wake up in random locations such as the grassy meadow where he was chased by mercenaries or later when he woke up on the bus. It wasn’t until the end of the episode that Steven gave his other personality, Marc, the ability to turn into Moon Knight allowing the hero to survive the Jackals that were attacking him.

It’s important to remember that Steven doesn’t know about his other personalities. That’s why he puts the lock on his ankle, but this doesn’t keep Marc from sneaking off to go on different adventures for Khonshu. The Moon God is the one who saved Marc from the dead and gave him his powers and is the voice that keeps on telling Steven to surrender his body to Marc in the episode.

As Steven learns more about Khonshu and Marc, it will become clear what the Moon God has in store for the character, but for the moment, fans got a good first look at what to expect from the series. Jeff Lemire’s run on Moon Knight had Marc Spector stuck in a mental hospital as he was told that he was projecting his life as a superhero and that he was really an ordinary person.

This lie made Marc believe he was crazy as he kept on imagining another life as Moon Knight and as Steven Grant. After he stopped taking the medicine he was given every day, Marc began to see that the medical staff were all hounds and that the therapist was none other than Ammit, the Egyptian Goddess.

This is a good thing as Lemire’s run showcases a Moon Knight that has to relearn who he is. It allows the story to be bizarre, a little weird, and also bold enough to let the reader understand all the different personalities inside of Marc’s head. In the comics, Marc Spector was a mercenary, but another version of him was also a studio producer for a Moon Knight movie as he worked with Marvel Studios.

This funny joke turned out to be one of the ways Marc tried to handle the stress of his situation as he tried to stop the Egyptian gods from destroying the world. It isn’t easy being Marc Spector or Steven Grant or Moon Knight. Most of the time, these personalities suffer from not seeing the world clearly and trying to find some normalcy in their chaotic life.

Already fans are aware that something isn’t for Isaac’s character as Steven has missed a date and sometimes can’t remember where he is and what’s real. This has led him to some tense scenes where he has to survive gunfire and drive a car without a driver’s license.

Marc Spector does take over for small moments to save the day, but Steven is still left in constant terror throughout as he can’t remember what just happened. Even though the Marvel Cinematic Universe won’t have Moon Knight in a mental ward, this is still a great rendition as it will help fans understand Moon Knight without having to read a lot of comics to understand the character.

Ammut appears to be dead at the moment and is trying to be summoned by Arthur Harrow (Ethan Hawke) in the series which may require the golden scarab that Steven is carrying. The Egyptian goddess has always been one of Khonshu’s enemies so it isn’t a surprise that the goddess will also be an enemy of Moon Knight.

After seeing the first episode, it’s clear that the violence is definitely more gruesome than the other MCU shows, but it’s nowhere close to topping any Netflix Marvel fight scene. Disney+ just censored parts of Falcon and the Winter Soldier meaning that fans shouldn’t be surprised if Moon Knight has some of its scenes changed over time.

Did you like the first episode of Moon Knight? Let us know what you think in the comments section below!

On Disney+  you can expect more episodes of Oscar Isaac’s Moon Knight, Ms. Marvel in Summer 2022, and She-Hulk to debut this year. For movies, Doctor Strange In the Multiverse of Madness comes out on May 6, followed by Thor: Love and Thunder on July 8, and Black Panther: Wakanda Forever on November 11.