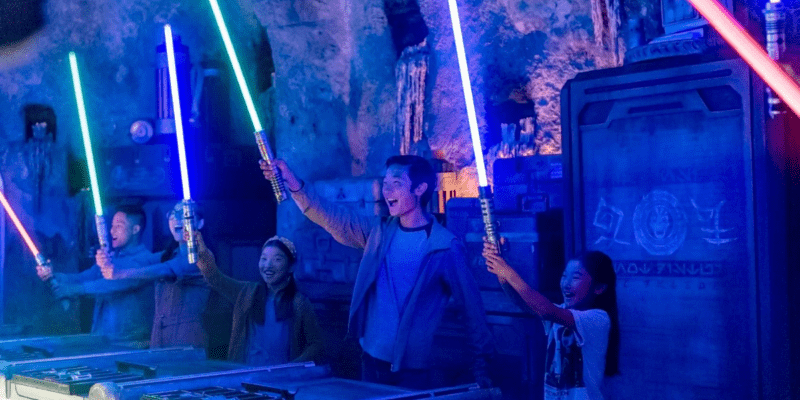 The Disneyland Resort and Walt Disney World offer some of the most exciting experiences for Guests of all backgrounds to enjoy, especially Star Wars fans with Savi’s Workshop lightsaber experience at Galaxy’s Edge. But, following some intense controversies and backlash over Disney’s stand on Florida’s “Don’t Say Gay” bill, Guests are boycotting numerous experiences.

Disney Parks worldwide offer an array of treats and thrilling experiences for Guests that open up worlds of fun and magic. Star Wars: Galaxy’s Edge at Hollywood Studios Park in the Walt Disney World Resort and Disneyland Park of the Disneyland Resort in Southern California hold Star Wars: Rise of the Resistance, Millennium Falcon: Smugglers Run, and more for every Star Wars fan to enjoy.

Nestled in the hustle and bustle of Galaxy’s Edge is Savi’s Workshop, a paid opportunity for Guests to construct their lightsaber with four hilt themes:

The paid experience — which costs $219.99 per lightsaber, plus tax — gives Star Wars fans to become a Jedi Knight, Jedi Master, or Sith Lord, depending on the kind of kyber crystal they choose (red, blue, green, or violet).

The 20-minute experience isn’t for everyone, but it is Disney’s flagship experience that gives a revolutionary opportunity for fans to step into the magic of George Lucas, the Skywalker Saga, and more.

But, Disney Parks are facing immense backlash and resistance from fans and Guests over the controversies of The Walt Disney Company’s stand on inclusivity and turmoil surrounding Florida state’s “Don’t Say Gay” bill.

Now, Guests are boycotting Savi’s Workshop, with some calling the paid experience something only for “rich folk”:

This is great for straight, rich folk! I guess you don’t care about anyone else.

This is great for straight, rich folk!

I guess you don’t care about anyone else.#ShameOnDisney

In response to Disney staying quiet on Florida’s Parental Rights in Education Act — which critics have titled “Don’t Say Gay” — to later have CEO Bob Chapek denounce the bill and conduct discussions with Florida Governor Ron DeSantis, The Walt Disney Company supported an organization-wide walkout on March 22nd to protest this new Act, as well as committed to donating $5 million to Human Rights Campaign and various LGBTQ rights organizations.

Pixar employees still condemned the Mouse House, issuing an official letter expressing their disappointment in the reported censoring of same-sex relationships in recent and upcoming Pixar movies, including Turning Red (2022).

Nonetheless, it seems that some fans aren’t too happy with the company’s current affairs, resulting in the boycott and canceling of various Park experiences.

How do you feel about Guests boycotting certain Disney experiences? Let us know in the comments below!