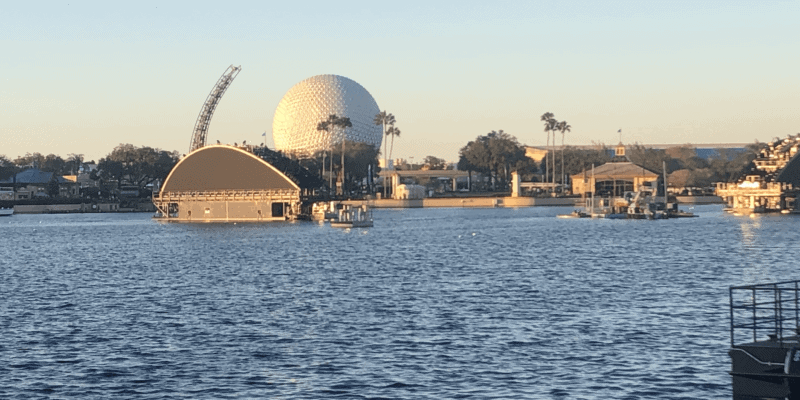 Could Disney be scrapping the plans for the daytime water show at EPCOT? Although Disney has not yet confirmed this change, we have seen one big change on the My Disney Experience app which no longer hints that it will occur.

EPCOT has been under a large transformation for quite some time now. The entirety of Future World, which is the section that sits at the front of the Park, is still under massive construction, with walls hitting Guests the moment they walk in past Spaceship Earth. Although the construction may not be the most appealing at the moment, we know that it will one day be very well worth it.

In the meantime, Guests can still enjoy all of the attractions in the area like Test Track, Soarin’, Living with the Land, Mission Space, and more. On top of that, all of the dining, like Space 220 is open, as well as the new Creations Shop and Club Cool. In the World Showcase, now that the France pavilion is complete along with Remy’s Ratatouille Adventure, there is not much construction ongoing.

The biggest change in the area takes place in the lagoon, with the five floating Harmonious barges taking up the centerpiece of the Park. At night, the barges create a fantastic show driven by music and water effects, and during the day, there are 50th anniversary graphics on display — but not much else. When the concept of the barges was revealed, it was also revealed that a daytime water show would be available. Considering how hefty the barges are, the water show was key for many Guests to help distract from their grander, which many do not find so appealing during the day.

Now, months after Harmonious’ debut, we are still awaiting the water show. We have seen the show undergo testing but the idea of a daily run has not yet become reality. Previously Guests were able to see the fountain show on the My Disney Experience app as an illustration on the barges. Now, Disney has put the app through an update, and it seems that the barges no longer have water flowing from them.

Although this does not mean the daytime fountain show is no longer happening, we can see that Disney is actively choosing to no longer advertise the fountains since they are not currently on display. At the moment, there is a 50th logo on the barges during the day with a water effect in the background.

At the moment, EPCOT is now celebrating the International Flower and Garden Festival, and tons of construction is going on! Spaceship Earth now has the new Beacon of Magic lights illuminating the sphere and Future World is on the road to completion. Club Cool and the new Creations Shop is open to Guests as well as Remy’s Ratatouille Adventure in the France Pavilion! Guardians of the Galaxy: Cosmic Rewind will also debut this year! Plus, you can enjoy the stunning, Harmonious show each evening!

What do you think about the daytime fountains? Let us know in the comments below.