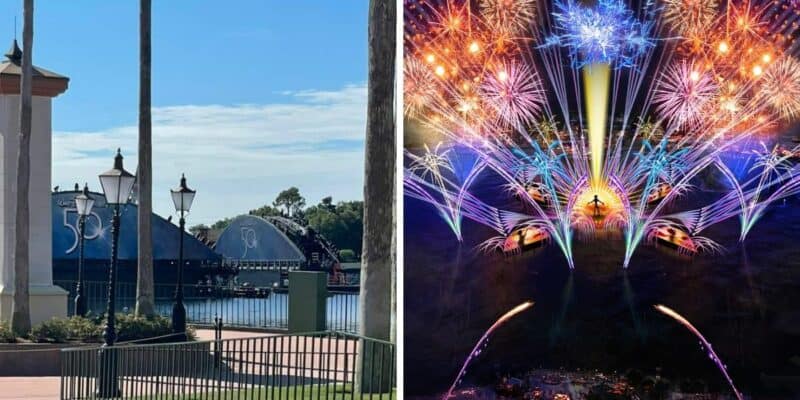 The Harmonious barges that are placed in the middle of the World Showcase Lagoon in EPCOT have been illuminated ahead of the 50th anniversary of Walt Disney World!

As you have likely heard EPCOT will debut a brand new nighttime spectacular called Harmonious for the 50th anniversary. If you have been to EPCOT in the last few months you could not have missed the barges situated in the middle of the World Showcase Lagoon. The show will soft open on September 29, 30, but its official debut is October 1.

Ahead of the first night of soft opening for Harmonious, we noticed that the barges are featuring a special 50th anniversary display during the day! The display is amazing and really adds to the feeling of celebration inside of EPCOT.

At this time it is unclear if how long this display will last, but it is exciting. Since Harmonious is surely here to stay, the possibility that the barges could display things during the day is awesome. Meaning we could see displays for Christmas, Food & Wine, Flower & Garden, and Festival of the Arts in the future.

Disney previously announced that the barges would be utilized for a daytime water show, however, no further information was given for that show and all signage for the show was removed from the park. You can see the concept art for the show below:

With the fate of the water show being so unclear, it is nice to see the barges being used during the day in a different way!

If you want to watch Harmonious a little early, Disney will be live streaming the fireworks on September 29. You can read more details about that here!

Let us know if you would like to see Disney use the barges for more displays like this one in the comments below!