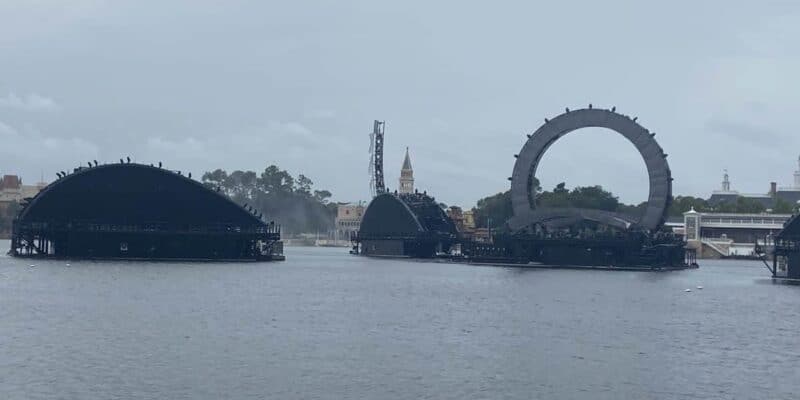 For the 50th anniversary celebration at Walt Disney World Resort, many Disney fans are excited to see not just one but two new nighttime shows at both EPCOT and Magic Kingdom.

At Magic Kingdom, things will be bigger than ever with the new Disney Enchantment show taking over Cinderella Castle. At EPCOT, Disney has been working hard to bring to life Harmonious, Disney’s most advanced and largest nighttime spectacular to date. Harmonious will use five barges on the World Showcase lagoon to tell its story, and although that is a nighttime show, there is also a daytime show that is meant to accompany it.

Considering the barges are definitely something that Guests cannot ignore due to their sheer size, Disney found a great way to use them during the day with a daytime water show. The show will not be as expansive as Harmonious but will add to the ambiance and beauty of the World Showcase and give the barges a purpose during the day.

Lately, we have heard more about Harmonious in terms of an opening date (October 1) as well as ongoing testing and showtimes being revealed. Still, not much has been said about the water fountain show during the day, and we haven’t gotten any updates regarding a debut date. Although some may assume that the daytime show will launch on October 1 along with Remy’s Ratatouille Adventure and Harmonious, we have yet to see Disney confirm this. Also, there are no showtimes or new promotional material available, which may have some Guests wondering what is going on with the show.

Disney may be keeping quiet about the debut date for the new daytime water fountain show at EPCOT, but as we previously reported, we have recently seen the fountains testing during the day, so it seems that Disney has not yet forgotten or abandoned the show’s idea. The testing has seemed to slow down in terms of what has been seen during the day, but that may just be due to evening testing and the project nearing completion. Of course, the testing could also be for Harmonious, as that show will use the same fountain features, but those will include projections and lighting.

Perhaps the fountain show will be a lot more casual, so there are no showtimes listed or grand announcements, as it may just be a new part of the World Showcase. Since it does not even have an official name attached to it, this may very well be the case. It is possible that we will see the fountains in action during the day on October 1, but considering how Disney has made it a point to announce all of their new upcoming shows and offerings, it would be out of the ordinary not to announce the daytime show.

For now, we will need to wait and see what happens with the show.

Do you think that EPCOT will debut the daytime fountain show on October 1?