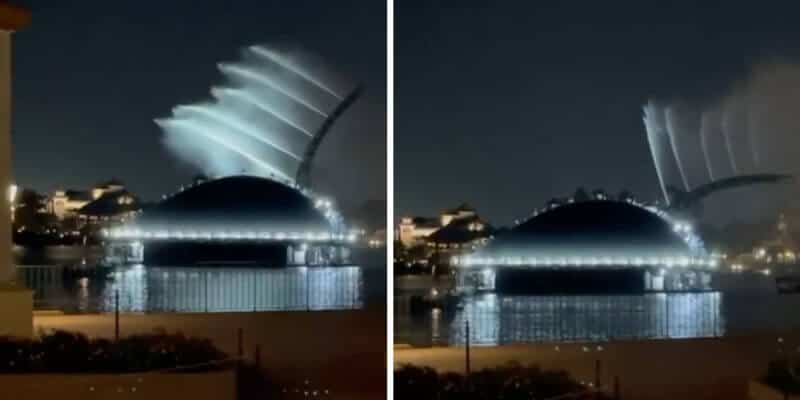 HarmonioUS is the new nighttime spectacular that EPCOT Guests and Disney fans alike have been patiently waiting for. Knowing that the show is meant to be the biggest evening show Disney has ever created has left many of us Guests waiting for an official announcement date!

Until then, we can as least satisfy our craving with EPCOT now testing the show while Guests are still in the park.

If you have been to EPCOT at the Walt Disney World Resort in the past few months, you likely have seen the barges that lay within the World Showcase lagoon. Something that we often forget is that HarmonioUS is not the only show coming to EPCOT that will use the barges! In fact, there will be a daytime fountain show that also will play on the lagoon for Guests to see.

Now, it seems that the barges are continuing to test in front of Guests, although we do not know for which show the testing is currently underway for. Yesterday evening Disney Princess Couture (@disneyprincesscouture_) was at EPCOT, and just prior to 8:00 p.m., one of the barges was fully testing its fountain capabilities!

Take a look at the video below, which we posted to our Instagram page.

So, it seems that Guests can get a glimpse of the barge testing while in EPCOT! Although we do not know when the testing will occur, Disney has shown that they have no problem showcasing the testing to Guests since the most recent testing occurred during park hours.

We also recently reported that in a D23 podcast, Director of Public Relations for Walt Disney World Resort Dave Coombs shared that the upcoming EPCOT nighttime spectacular is actually in the early stages of development saying:

“And we are at the really early stages of the developments so there’s so much more to come but even from what you can see so far it’s going to be such an exciting show so we are kind of holding our breath and waiting to learn more about it.”

The interesting thing with this statement is that although the show is still in its early stages, the barges are already looking so great! This just means that the stunning sights we have seen so far are just the tip of the iceberg! For now, we will have to be patient and stay tuned to Disney for any opening information for the EPCOT shows.

A popular thought is that the shows will open in time for the 50th anniversary celebrations which begin October 1, but it is possible that it will open after that date, as Disney has only announced a 2021 debut so far.

What do you think of the barge testing? Are you excited for the new shows at EPCOT?