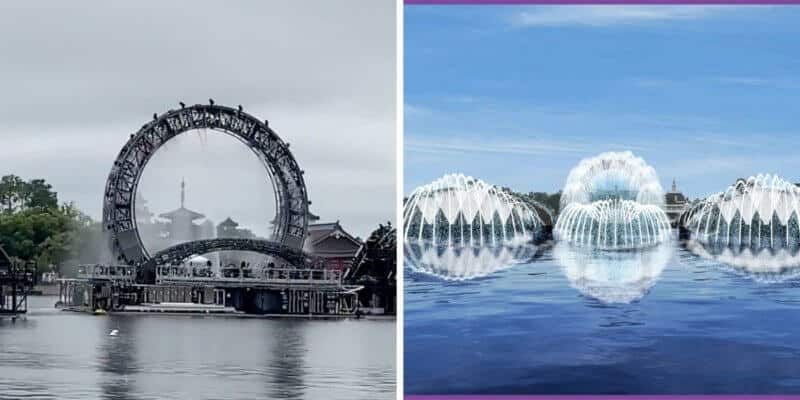 The future of EPCOT looks bright as many new developments and upcoming attractions are coming soon. One nighttime event that is currently being worked on is HarmonioUS, a new show that was announced at D23 Expo in 2019.

The barges used for HarminioUs will also be sued for a new daytime water show on World Showcase Lagoon! Now, we have a video of the water features being tested at EPCOT.

Although we have seen wonderful shows at EPCOT in the past, HarmonioUS will be Disney’s biggest nighttime show yet. While we do not know the name of the daytime water show or when it will debut, we are excited to see testing continue on the barges in the lagoon as it may mean Guests will see this offering in the near future.

Hyperion Adventures Podcast @HyperionPodcast on Twitter shares a video and images of a Disney Imagineer in the water working closely with water fountain effects and screen testings. You can see the giant centerpiece ring as well as the barges. @HyperionPodcast writes,

Screen testing on the Harmonious barges today at #Epcot.

Screen testing on the Harmonious barges today at #Epcot. pic.twitter.com/cSpxpdGfuR

“As you’ve said we’ve seen already these huge barges that are moving out into World Showcase Lagoon and these include LED panels, choreographed moving fountains, colorful lights, lasers, and of course pyrotechnics.”

These choreographed fountains are clearly coming together as @HyperionPodcast shared,

Again, we do not know when this unnamed daytime water show will debut. We also do know when HarminioUS will debut, but we keep our fingers crossed that the show will be ready by the 50th Anniversary of Walt Disney World which begins October 1, 2021.

Are you excited about the new HarmonioUS show? Let us know in the comments below!