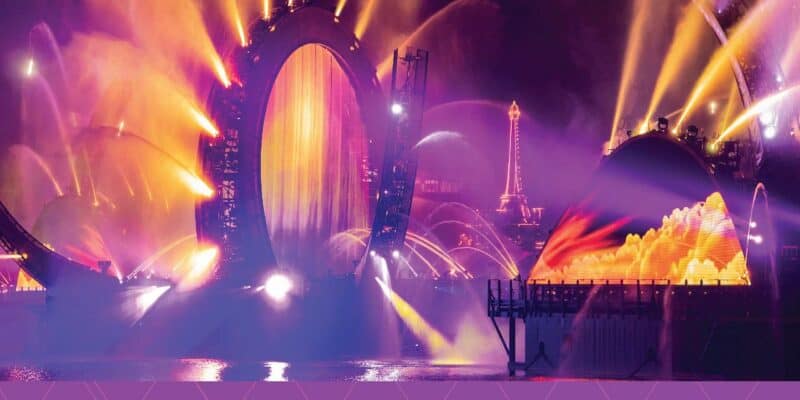 EPCOT will debut an epic new firework show, Harmonious, on October 1, the kickoff date for The World’s Most Magical Celebration, Walt Disney World Resort’s 50th anniversary. Now, Disney has released more details about this nighttime spectacular — including the runtime!

According to a new press release, Harmonious is 20 minutes long, and the show will be displayed nightly (weather permitting). This is typical of many other Disney nighttime spectaculars, but it’s certainly exciting to know the official runtime finally!

Disney has also revealed more information about the songs that will be featured in Harmonious. There will be 15  songs in the show, with 13 languages represented. The musical ensemble features 240 artists from around the world, and in order to bring the show to life, it took over 110 separate recording sessions in nine countries. The scale of this show is massive!

Per the press release:

EPCOT guests gathering on the shores of World Showcase Lagoon are treated to a magnificent cultural symphony, dramatizing the unifying power of story and song. On this musical journey around the planet …

“Harmonious” closes the curtain for each EPCOT day with the show’s hopeful message of the magic that happens when people join together. As it draws to a close, the inspiring ballad “Someday” (from “The Hunchback of Notre Dame”) combines with the new EPCOT theme from composer Pinar Toprak to unite the people of the world in hope and promise found throughout the park every day.

The fact that Harmonious features Walt Disney Animation Studios classics like Mulan, The Jungle Book, The Hunchback of Notre Dame, and Aladdin, as well as newer favorites like Pixar Animation Studios’ Brave and Coco and of course, The Princess and the Frog, certainly has us excited to see the show when it premieres next week. Although the official debut date is October 1, Disney will be live streaming Harmonious on September 29 — you can read more here!

Overall, Harmonious seems to be a magical, heartfelt, and inspiring show that is perfect for every Disney fan. We can’t wait to see this new nighttime spectacular and be inspired in person!

Are you excited to see the new nighttime spectacular Harmonious after it makes its Walt Disney World debut? Click here to book a trip to The Most Magical Place on Earth!