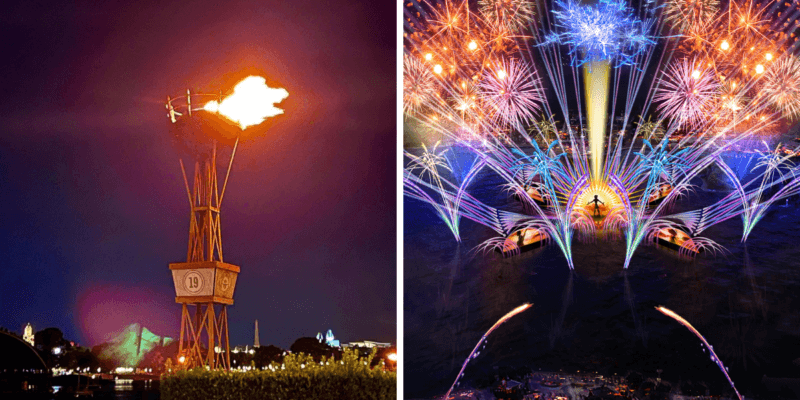 EPCOT is gearing up to debut a brand new show, Harmonious, for the 50th anniversary of the Walt Disney World Resort.

Now, we have more details about this upcoming show as it draws closer to its debut that will please any EPCOT fan.

Harmonious is the permanent replacement for EPCOT’s previous show Illuminations. Currently, EPCOT is showing a temporary nighttime spectacular called EPCOT Forever. Disney has already confirmed that once Harmonious debuts on October 1, EPCOT Forever will be gone for good.

Disney Parks fans who are excitedly looking forward to Harmonious got some good news on social media from Disney. Imagineer Zach Riddley shared that Harmonious will utilize the torches that line World Showcase Lagoon just as Illuminations and EPCOT Forever have done.

Storytelling by firelight. These torches are fierce ??? and a core part of the spectacular experience each night in World Showcase lagoon. These torches have played a role in Illuminations and EPCOT Forever. And I can confirm they will be part of our new show Harmonious coming Oct 1st!!

These torches add to the experience as they illuminate the World Showcase Lagoon with fire! It is great to know that as these torches were used as a part of the show for EPCOT Forever and Illuminations, they will continue to be used for Harmonious. These have become a staple of EPCOT nighttime entertainment.

It is worth noting that the barges that will be used for Harmonious will also be utilized for a daytime fountain show. EPCOT has plenty for fans to look forward to this year!

Harmonious is not the only new offering coming to EPCOT for the 50th anniversary of Walt Disney World! EPCOT is also opening a brand new attraction, Remy’s Ratatouille Adventure on October 1.

If you are a Cast Member, Disney Vacation Club Member, or Walt Disney World Annual Passholder you may be able to preview the attraction before it opens. Availability for the previews is limited so be sure and keep a close eye on the email associated with your My Disney Experience accounts.

You can also look forward to Spaceship Earth lighting up in the EARidescent color scheme that will represent the 50th anniversary of Walt Disney World. This will begin on October 1.

We are so excited about all of the new and exciting offerings coming to EPCOT. Stay tuned to Inside the Magic for all the latest news and updates on EPCOT for the 50th anniversary of Walt Disney World.

Will you be watching Harmonious at EPCOT on October 1? Let us know in the comments!

Want to book a Walt Disney World vacation to experience the 50th anniversary in person? We can help, click here for more information.

Comments Off on Disney Reveals More Details About EPCOT’s Harmonious