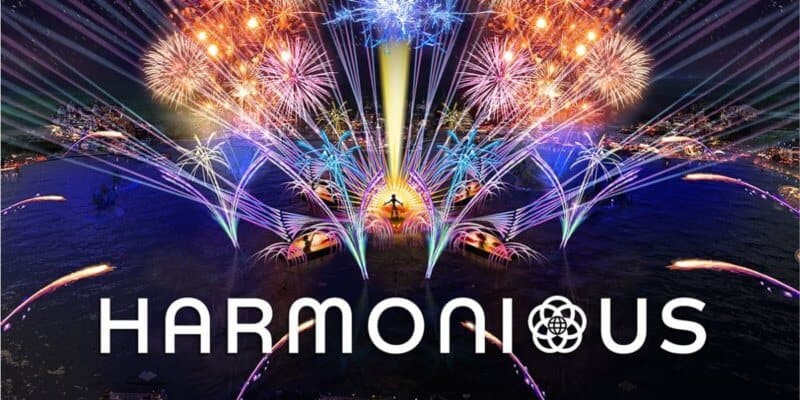 It’s time to celebrate! HarmonioUS will debut at EPCOT on October 1, 2021, just in time for the Resort’s 50th anniversary and EPCOT’s 39th birthday. Barges, lights, music, and fireworks will make up this new Walt Disney World Resort Nighttime spectacular!

HarmonioUS Gets Debut Date at EPCOT

As the Walt Disney World 50th anniversary celebration approaches, there are so many new experiences to look forward to in the Florida Disney theme parks. From attractions to new nighttime spectaculars, Disney will kick off the 50th anniversary celebration beginning on October 1, 2021. The celebration will span for 18 months after this date, even running into 2023. With all the excitement, any Disney fan would love to attend this celebration. As the 50th approaches, so does the debut of the new nighttime spectacular, HarmonioUS.

This new nighttime show will be at Disney’s EPCOT theme park, replacing the classic Illuminations: Reflections of Earth and the interim EPCOT Forever show.

We knew that HarmonioUS would debut this year, but we were hoping to see it ahead of this fall. Instead, we’ll be treated to an encore version of EPCOT Forever this summer.  The new show will focus on Disney music, and how music connects people around the world. It will also feature colorful lights, massive floating set pieces, high density water curtain fountains and more.  The Disney Parks Blog shares more about one of the largest nighttime spectaculars saying,

“It’s a grand, powerful tribute to the stories and songs that unite us, embracing new technical magic that incorporates pyrotechnics, choreographed moving fountains, lighting and media in new ways. “Harmonious” will invite you to travel the globe through new interpretations of classic Disney songs as you’ve never heard them before, reimagined in more than a dozen languages by a diverse group of 240 artists from around the world.”

This nighttime extravaganza will take place on EPCOT’s World Showcase Lagoon, which has already seen some changes.  In addition to the HarmonioUS barge placed in the Lagoon, Disney unveiled new signage and fireworks testing has occurred as well, signaling consistent progress toward making this show a reality.

Plan your golden vacation to Walt Disney World’s 50th anniversary with the help of the travel professionals at Academy Travel. They have the fire (work) power to get you to Orlando in flashing style, so you can celebrate all the EARidescent goodness!

Are you looking forward to HarmonioUS? Leave us a comment below with your thoughts about the new show!