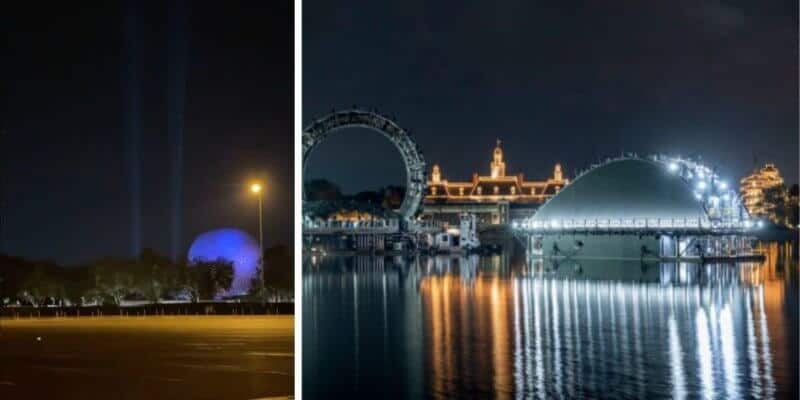 If there is one exciting thing Disney Guests know will be coming in 2021, it’s HarmonioUS!

After more than one full year without nighttime spectaculars like Happily Ever After at Magic Kingdom, Fantasmic! at Disney’s Hollywood Studios, and Rivers of Light at Disney’s Animal Kingdom, EPCOT may be the first to return to the world of nighttime shows, with what Disney has said will be their biggest production yet.

Although we do not know exactly when this year the show will debut, speculation is that it will not arrive until at least October 1, as that is the start of the 18-month celebration for Disney World’s 50th birthday! However, at the moment, all we have confirmed is that it will make its debut this year.

Disney has stated that the show in as of March the show was confirmed to be in “very early development”, but now with testing being done, it looks as though they are making strides. Please note that there is still not an official opening date for the show.

Interestingly, EPCOT has seemingly begun testing music for HarmonioUS as Guests are leaving the Park, we recently reported on EPCOT Forever music testing in the evening, which was an interesting revelation as it has not been said that HarmonioUS’s predecessor would be making a return.

There could be a chance that we will see some of the EPCOT Forever music in HarmonioUS as a homage to the show, or perhaps the tracks were just being used for audio levels and testing. A daytime fountain show will air as well, using the barges in the lagoon, which could be pulling music from past shows.

All of this is speculation, however.

Now, as we said, the excitement is ramping up even more because it seems EPCOT is testing the HarmonioUS soundtrack! Drew (@itsDrewDavid) was close by Spaceship Earth yesterday evening when the soundtrack began playing. In the below Tweets, you can first see that spotlights are being tested. There is also audio playing, however, we are unable to make out exactly what the song is.

In the second Tweet, we hear a familiar tune as the theme song from the EPCOT Experience Center plays!

disney testing harmonious and spotlights tonight at epcot!!!
this is the theme from the epcot experience center!! i’m looking forward to the show!!

this is the theme from the epcot experience center!! i’m looking forward to the show!! pic.twitter.com/mcZhE2gMn3

The barges on the World Showcase lagoon have also been actively testing, so all Disney fans can keep their fingers and toes crossed that this show continues to progress towards its debut day this year, whenever that may be.

Aside from HarmonioUS, EPCOT is going through major changes with Remy’s Ratatouille Adventure finding a home in the France pavilion, debuting on October 1, 2021. Guardians of the Galaxy: Cosmic Rewind is making progress in Future World (along with the rest of the section!).Walt Disney Imagineering announced that Spaceship Earth is installing a new lighting package that will be permanent, including a wrap-around lighting ribbon at the front of the park, brand-new flags, and what seems to be a sparkling Spaceship Earth.

And, at the moment, Taste of EPCOT’s International Flower and Garden Festival is running for Guests to enjoy.

When do you think HarmonioUS will debut? Is that the nighttime show you are most excited to see at Disney World?

If you want to be at the 50th Anniversary Celebrations, you need to get booking today to ensure you arrive on time in Orlando! You can visit Magic Kingdom, Animal Kingdom, Disney’s Hollywood Studios, and EPCOT to celebrate with Mickey Mouse and Minnie Mouse in Orlando. Disney Park Pass reservations are selling fast, so click here to get started!

Comments Off on HarmonioUS Soundtrack Plays at EPCOT After Hours