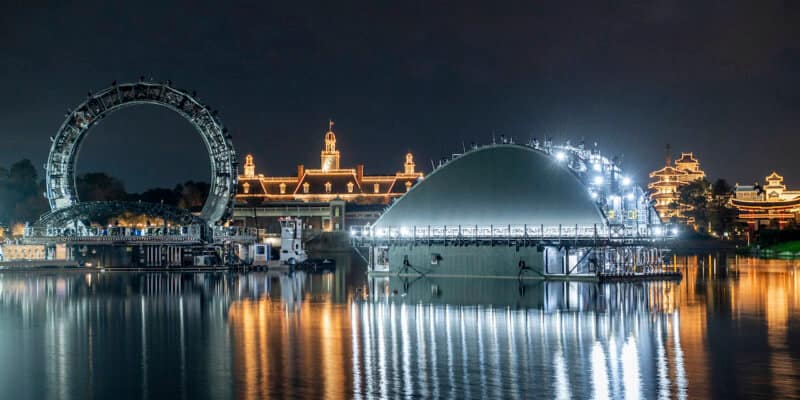 EPCOT is gearing up to debut a brand new nighttime spectacular, HarmonioUS for the 50th Anniversary celebration of Walt Disney World.

While Guests have missed the nighttime entertainment that is a staple of Disney theme parks, it appears we may not have to wait much longer before we see fireworks return!

Disney Parks around the world are renowned for their magnificent fireworks displays. Unfortunately, due to the pandemic and concerns regarding large crowds gathering in the parks, fireworks have not returned to Walt Disney World as of yet. Thankfully for fans of the fantastic fireworks displays, we know that Disney is creating a brand new show called HarmonioUS that will debut sometime during the 50th Anniversary celebrations of the Walt Disney World Resort, which will last for 18 months beginning this October.

The barges that have been placed in the middle of the World Showcase Lagoon in EPCOT will be used for both day and nighttime entertainment. We have seen Disney testing the spectacular water effects on these barges during the day, and now we see Disney is testing some audio in the evening!

Thanks to a tweet by reporter Scott Gustin we can see that Disney was testing audio in the evening at EPCOT:

Disney has been doing some Epcot Forever testing this week.

Disney has been doing some Epcot Forever testing this week. pic.twitter.com/cMfb5j0Gyz

While this sounds like the audio used for EPCOT’s previous nighttime spectacular, EPCOT Forever, we are not certain that the EPCOT Forever show will be returning ahead of the debut of HarmonioUS. EPCOT Forever was intended to be a limited-time nighttime show at EPCOT that would run after IllumiNations ended and before HarmonioUS debuted. The show ran for a few months beginning in fall 2019 until the parks temporarily closed in spring 2020.

Although the run of EPCOT Forever was cut short when the parks closed amid the pandemic, Disney has not given any indication that EPCOT Forever will return, and it is possible that the audio was used for testing instead of the HarmonioUS audio as to not give the new musical score for the show away.

We do know that Disney has been hiring technical designers to work with fireworks, so perhaps we will see more fireworks tests soon!

One thing is clear, we cannot be certain about if EPCOT Forever will return (or when exactly any fireworks will come back to EPCOT) until Disney provides more information! We are excited to see HarmonioUS debut, and even more excited at the thought of nighttime entertainment being a part of the EPCOT park experience once again.

Related: Why 2021’s EPCOT Flower & Garden Festival Is Better Than Ever

Are you looking forward to watching HarmonioUS when it debuts? Let us know in the comments!