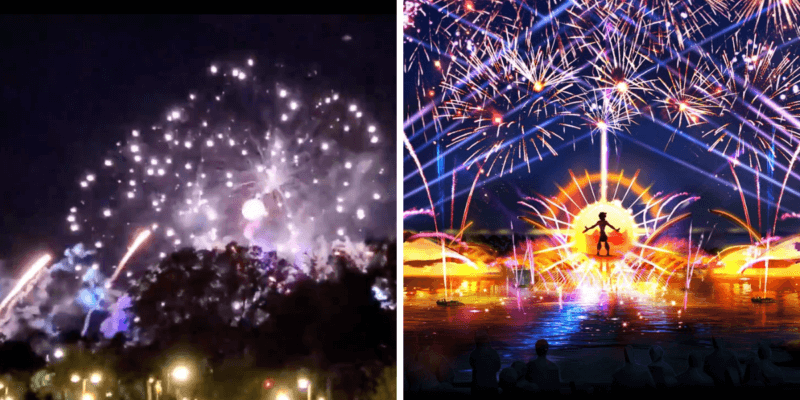 Watch out for the explosions! Disney Resort Guests got quite a surprise around midnight last night. After the theme parks were closed, EPCOT area Guests were woken up by large BOOMS. When they looked up to the sky, they were treated to a full skyline show of EPCOT’s HarmonioUS fireworks show! The whole she”bang” is slated to debut for Disney’s 50th Anniversary later this fall, complete with massive floating set pieces, a fireworks display, and moving fountains.

This morning, Disney Guests planning trips are ecstatic to see that HarmonioUS was testing overnight in the World Showcase Lagoon. This may mean that the return of fireworks to Disney theme parks is closer than ever before. The EPCOT show ran in full around midnight, well after the park’s closing but was visible, especially to nearby Guests at the Riviera Resort.

When word (and sound!) got around that Disney Imagineers were testing the full nighttime spectacular around midnight on Thursday, June 3, 2021, excitement was palpable on social media. Twitter user Shan (handle of @simply_shan_) rapidly fired the message and followers added dancing GIFs which we completely agree with!

Pricking up her ears, Brook posted on her Twitter feed (handle of @BrookeGMcDonald) that she could hear Disney Music including “Arabian Nights” playing in the distance from her vantage point at Disney’s Boardwalk Inn and Suites in between firework pops.

Visitors staying at Disney’s Riviera Resort were just falling asleep after a big Disney Park day when they were awakened by large BOOMS…. They looked out to a full rehearsal testing for EPCOT’s HarmonioUS! What a treat for them, and great foreshadowing for those staying at this EPCOT area Resort in the future.

Was just falling asleep at the Riviera Resort when BOOM, fireworks outside our window and what appears to be rehearsals for Harmonious at Epcot! #Harmonious #Epcot #Fireworks #DisneysRivieraResort #DisneyWorld pic.twitter.com/Kist8Apbh5

Likewise, Disney Guest Molly was initially forlorn that her amazing view-hotel-room between EPCOT and Disney’s Hollywood Studios wasn’t going to provide a nighttime show, but Fairy Godmother must have been looking after her, since she got her wish and saw the theme park fireworks test from her room! Here is her view:

I was really sad that I have such a good view of studios and Epcot from my room but can’t see the fireworks shows because there isn’t any. It on my last night they decided to test some and I got to watch from the window in my room ? pic.twitter.com/cphnLYV2mR

Are you ready to see fireworks and nighttime shows return? Leave us a comment below about looking forward to seeing HarmonioUS at EPCOT!