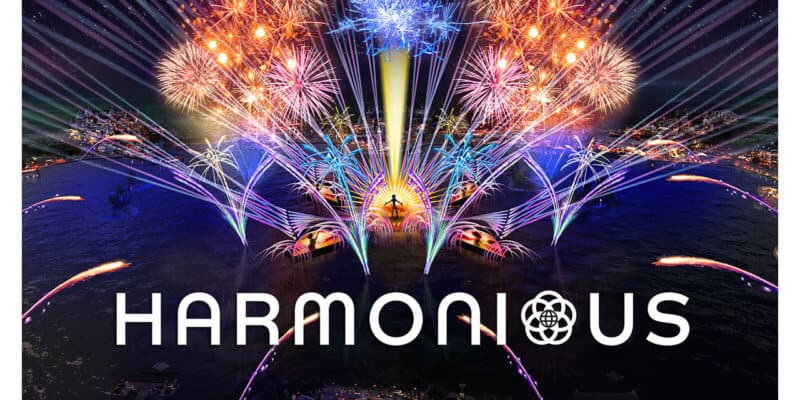 Here is everything we know so far about the upcoming show.

Do you want to book a trip to Disney World? Get started today!

HarmonioUS is an upcoming nighttime spectacular that will debut in World Showcase at EPCOT on October 1, 2021. It will include pyrotechnics, projections, fountains, lasers, and more. Disney Parks Blog describes this show as:

Expected elements of the HarmonioUS fireworks show at EPCOT

At the D23 Expo in 2019, Walt Disney Company CEO Bob Chapek announced that the brand-new show would be coming to EPCOT. HarmonioUS is going to replace the extremely popular IllumiNations — and just before the pandemic, a “placeholder” show called EPCOT Forever was briefly used to fill the void between IllumiNations and HarmonioUS. During the D23 Expo, Chapek stated it would be the “largest nighttime spectacular in Disney history.”

Walt Disney Imagineering Executive Producer Michael Hundgen also spoke out on the subject, saying, “Think of it as the latest toolkit with the latest and greatest pyro, projections, fountains, and lasers. We’re bringing it to that show. It’s sort of all the bells and whistles.”

What pyrotechnics are expected to be part of the HarmonioUS show?

This nighttime spectacular is set to be like nothing anyone has ever seen before — including pyrotechnics, lighting, fountains, and music all working together to create harmony within the theme park.

“Harmonious” is a global effort, truly embracing the magic of possibility. In recent weeks, Disney Live Entertainment technical designers across the country have been programming various elements of the show, from media and fountains to lighting and pyrotechnics, working in a completely virtual environment. Our music producers at Walt Disney Imagineering have been remotely directing recording sessions with an incredibly diverse array of musical artists, performing in studios around the world.

Once complete, “Harmonious” will be one of the largest nighttime spectaculars we’ve ever produced. We’re busy setting the stage of this innovative toolkit, preparing each of the show’s five floating platforms to take its place on World Showcase Lagoon. Positioned like a compass, these platforms house the primary show equipment for “Harmonious,” and on the recently-placed center platform stands an iconic six-story-tall central ring structure, supporting a high-density water curtain, moving lights, fountains and more.

Do you want to book a trip to Walt Disney World to see HarmonioUS when it debuts? Get started today!

What is the music for HarmonioUS going to be like?

The music has been created specifically for this nighttime spectacular so that it coincides with the LED screens, pyrotechnics, and other elements of the show. When discussing the music for HarmonioUS, Disney Parks Blog had this to share:

Recently, Walt Disney Imagineering and Disney Live Entertainment team members had an opportunity to update some of our leaders on the historic, multi-year transformation taking place at EPCOT. It was a wonderful day spent with Bob Iger, chairman and chief executive officer of The Walt Disney Company, and Bob Chapek, chairman of Disney Parks, Experiences and Products. And the entire presentation concluded with a crescendo performance from a group of live singers to help bring the powerful stories of “Harmonious” to life!

[…] “Harmonious” is one of the largest nighttime spectaculars ever created for a Disney Park. The show is a beautifully crafted dreamscape of Disney music and images, reimagined by diverse cultural musicians and artists from around the world. It’s a transformative experience, where we can discover how Disney music has the power to inspire and unite us all with the magic of possibility.

Ever since Disney announced HarmonioUS, they have been continuously working on getting the nighttime spectacular ready for Guests, however, the ongoing pandemic did put a pause on the project.

What has caused the delays to HarmonioUS?

Disney Imagineers did have a few bumps in the road — the biggest being the ongoing pandemic which put a pause on several construction projects, including this one.

However, construction has since picked back up and testing has even been seen by Guests in recent weeks, including LED screens lighting up, water blasting from the fountains in the barges, and even fireworks being set off after park hours.

What closures and park disruptions can Guests expect as the HarmonioUS fireworks show is being built at EPCOT?

When is the HarmonioUS show opening at EPCOT?

Walt Disney World has confirmed that HarmonioUS will debut on EPCOT’s birthday and the start of Disney World’s 50th celebrations — October 1, 2021!

How long is the HarmonioUS show expected to run?

At this time, Guests can expect HarmonioUS to be EPCOT’s permanent nighttime spectacular as Disney has not announced an end date to this show.

Do you want to book a trip to Disney World? Get started today!

Where to find the HarmonioUS fireworks show in EPCOT

World Showcase Lagoon will be the home for HarmonioUS, just as it was for IllumiNations and EPCOT Forever.

Where is the World Showcase Lagoon?

Where are the best spots to watch fireworks shows at EPCOT?

The fireworks usually happen close to 8 p.m. or 9 p.m. This is subject to change, so it is always best to check the My Disney Experience app or the Walt Disney World website for the most up-to-date information.

A Daytime Show is Also Coming to EPCOT

HarmonioUS isn’t the only show coming to EPCOT as Disney also confirmed a daytime show will be installed on World Showcase lagoon!

Announced at D23’s Fantastic Worlds Celebration event called “EPCOT – The Magic of Possibility,” Zach Riddley, Imagineering Portfolio Executive for Walt Disney World Resort, and Melissa Valiquette, Vice President of EPCOT, shared that the massive barges being built for the nighttime spectacular, HarmonioUS, will be permanently installed in the middle of World Showcase lagoon to provide entertainment all day.

“These show elements will become a defining feature of EPCOT,” said Riddley. Their scale gives us a chance to bring a beautiful new ambient daytime look to the world showcase lagoon with water fountains that perfectly situate these elements within World Showcase and of course the real magic will happen at night when they come alive.”

You can read more about the daytime show by clicking here.

Planning a Trip to Disney World?

If you want to visit the Most Magical Place on Earth, but aren’t sure where to begin planning, don’t hesitate to reach out to our friends over at Academy Travel. The authorized travel planners will be there with you every step of the way when planning your magical vacation. You can start booking your Disney World vacation today by clicking here!

Are you excited to see HarmonioUS whenever it debuts? Let us know in the comments below.

Comments Off on Disney’s HarmonioUS: The New EPCOT Fireworks Show