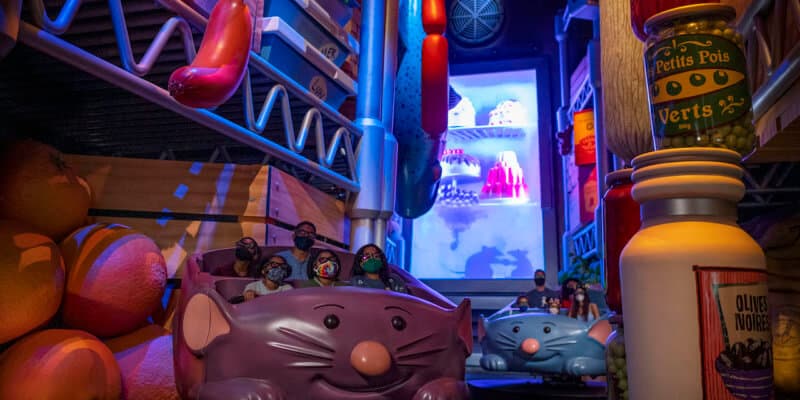 If you are excited for the 50th-anniversary celebrations at Walt Disney World Resort beginning this October 1, you may be eager to experience some of the new offerings come to life!

From Harmonious lighting up the EPCOT night sky to Disney Enchantment bringing Magic Kingdom aglow and everything in between, there will be so much for Guests to experience. October 1 will also be a big day for EPCOT, as it will be introducing an all-new attraction!

Remy’s Ratatouille Adventure has been the talk of the theme park for over a year now, as it was originally meant to debut last year but had to be delayed due to the pandemic.

Now that we are only a few short months away until we can shrink down to the size of Remy, some of us Disney fans may be getting a little impatient with the debut being within reach. Well, some Disney fans will get to have a shorter wait than others!

Reporter Scott Gustin (@ScottGustin) just released the information that Cast Members will be able to ride the attraction before it officially opens, much like we saw with Mickey and Minnie’s Runaway Railway at Disney’s Hollywood Studios.

NEW: Walt Disney World Cast Members will be given an early-access opportunity to experience Remy’s Ratatouille Adventure next month before it opens to guests on October 1.

NEW: Walt Disney World Cast Members will be given an early-access opportunity to experience Remy's Ratatouille Adventure next month before it opens to guests on October 1. pic.twitter.com/Zs3tLs4wEq

Scott also followed up his Tweet telling Guests to keep their eyes peeled for more news regarding early entry into the attraction, stating:

Look for some other “early access” opportunities over the next few weeks – including a likely preview for DVC members.

Look for some other "early access" opportunities over the next few weeks – including a likely preview for DVC members.

Although not confirmed, it seems there is reason to anticipate that DVC members will also get the added perk of riding Remy’s Ratatouille Adventure before regular Park Guests on October 1.

Bonjour Cast Members! As part of The World’s Most Magical Celebration honoring our 50th anniversary, Remy’s Ratatouille Adventure will officially open at EPCOT on October 1. With Cast Members at the very heart of our 50th celebration, there will be Cast Member “squeak” peek opportunities for this recipe for excitement! Details are still “cooking up,” so stay tuned to the HUB for preview dates and registration opportunities—coming soon! C’est magnifique! #DisneyCastLife #DisneyWorld50

Disney World President Jeff Vahle also took to his Instagram to alert Cast Members (as well as non-Cast Members) of the news:

Walt Disney World Cast Members, we’re COOKING up some fun for you! Starting next month, you will have the opportunity to experience Remy’s Ratatouille Adventure before it officially opens to our Guests on October 1. More info will be posted on the HUB soon, so keep an eye out. And if you’re not a Cast Member, there may still be a way for you to see this attraction before it opens. More details to come!

Vahle notes that non-Cast Members may still have a way to see the attraction before its debut, which may very well corroborate the idea that Disney Vacation Club members or other Guests can gain access to previews, as well. We’ll have to wait and see!

With Annual Passholders already filling up, all Disney Park Passes for EPCOT on October 1, getting to ride the attraction early will surely a highly coveted opportunity when it arises.

Are you looking forward to Remy’s Ratatouille Adventure opening?