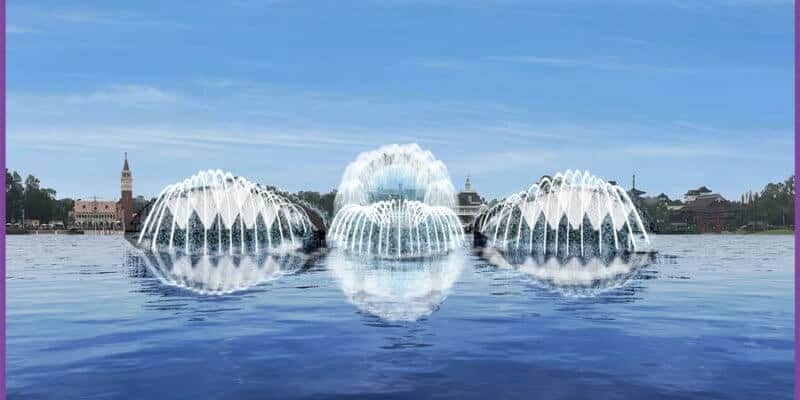 During D23’s Fantastic Worlds Celebration event called “EPCOT – The Magic of Possibility,” Zach Riddley, Imagineering Portfolio Executive for Walt Disney World Resort, and Melissa Valiquette, Vice President of EPCOT shared that the massive barges on World Showcase Lagoon will be permanently installed to provide entertainment all day — meaning the barges will be used for both a daytime show as well as for the new nighttime spectacular, Harmonious.

Although the barges have been in use for EPCOT’s nighttime spectacular, Harmonious, ever since October 1, 2021, Guests have not really seen them in use for the daytime show Riddley teased last year, aside from random days here and there.

“These show elements will become a defining feature of EPCOT,” Riddley said. “Their scale gives us a chance to bring a beautiful new ambient daytime look to the world showcase lagoon with water fountains that perfectly situate these elements within World Showcase and of course the real magic will happen at night when they come alive.”

However, that changed this past weekend when EPCOT put the barges on display just for the Walt Disney World Marathon!

This last weekend, Disney hosted the popular runDisney event, the Walt Disney World Marathon, where thousands of runners participating in various events, one of which took place at EPCOT.

During the event, Disney turned on the fountains on World Showcase Lagoon, and Twitter user bioreconstruct was able to snap aerial photos of the daytime show, which they shared to social media:

Rare aerial look at Harmonious fountains on in daytime. In some viewpoints rainbows were seen in the mist.

Fountains on as part of the #WDWMarathon entertainment.

Rare aerial look at Harmonious fountains on in daytime. In some viewpoints rainbows were seen in the mist.

From a bird’s eye view, this daytime show looks stunning. We hope to see EPCOT continuing to display the fountain throughout the day for Guests to enjoy while walking around World Showcase.

Do you like seeing EPCOT turn the fountains on during the day? Let us know in the comments below.