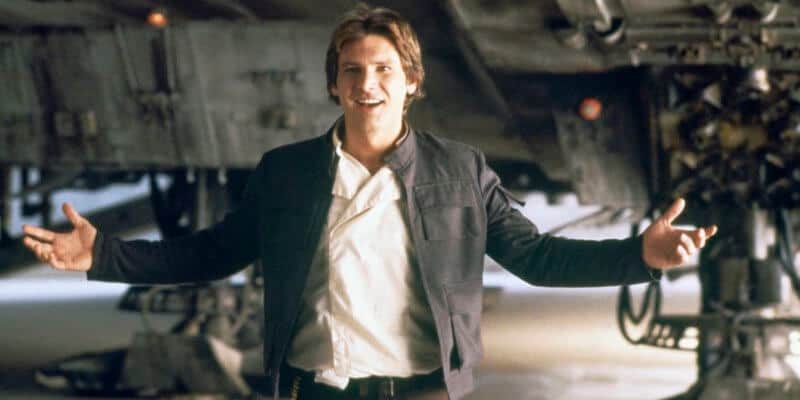 When it comes to the Star Wars story, there are certain characters who have played a critical role in a galaxy far, far away since George Lucas released Star Wars: Episode IV – A New Hope in 1977.

For over 40 years, the original trilogy’s core trio has been the foundation of the Skywalker Saga.

When The Walt Disney Company purchased Lucasfilm, Ltd. in 2012, in fact, one of the first things they did was delve into Solo’s backstory, exploring how he came to meet Lando Calrissian (Billy Dee Williams) — who was first introduced in Star Wars: Episode V – The Empire Strikes Back (1980) — and how he gained possession of the famous Millennium Falcon starship in the first place.

Solo: A Star Wars Story (2018) starred Alden Ehrenreich as a young version of everyone’s favorite scoundrel, while Donald Glover took on the role of a pre-original trilogy Calrissian.

Solo is on his own, save for his first love Qi’ra (Emilia Clarke), when fans meet him in Ron Howard’s standalone Star Wars film, but Solo screenwriter Jon Kasdan has confirmed that at least one of the young man’s parents, his father, is still alive. Around the time of the movie’s release, he Tweeted a page of notes that included the line:

“[Han’s father is] still out there somewhere, drinking himself to death”

Now, thanks to details about Star Wars and Marvel Comics newest series, which is set to follow the adventures of Han Solo and Chewbacca, it is possible that the franchise could be introducing Han’s father for the very first time.

StarWars.com revealed a synopsis of the upcoming crossover series, including the fact that Greedo and Solo apparently joined forces (no pun intended) for a time before the infamous “Han shot first” scene that still divides the Star Wars fandom to this day:

A description of the first issue notes that the story arc will include “a reunion with the last person Han expected to see.”

It is easy to immediately assume this line refers to Qi’ra, who has been heavily featured in Star Wars comics of late, but writer Marc Guggenheim has already confirmed that the Crimson Dawn associate doesn’t show up until Issue 3.

The answer may lie in the cover [below] of the third issue…If this mysterious third character is the one alluded to in the description of Issue #1, it’s clear we’re going to see Han with some sort of mentor from his past. But could this character actually be none other than Han’s father?

The article went on to note:

Probably the most convincing evidence for this bearded character being Han’s father is also the most meta: He bears a striking resemblance to Sean Connery, who played Indiana Jones’  [sic: Jones’s] father in Indiana Jones and the Last Crusade.

Since both Indy and Han are played by Harrison Ford, it would serve to reason that their fathers would bear a resemblance to one another. And, if the purpose of this new Star Wars comic crossover with Marvel is to share details about Han and his Wookiee copilot’s life after Solo, but prior to A New Hope, who better to help bridge the gap than Han’s long lost dad?

Although the character has never been officially introduced into the Star Wars canon, the few details we do know about him indicate that Han gets some of his rogue ways from his old man. Plus, the fact that the younger Solo was on his own with no family name at a very young age indicates that his parents had a huge influence on how his life turned out, even if it wasn’t in a positive fashion — as a result Han’s father is a crucial character in the overall Star Wars story.

Do you think we’re about to meet Han Solo’s father for the first time?

Comments Off on ‘Star Wars’ Is Set to Introduce a Crucial, Unexpected Character