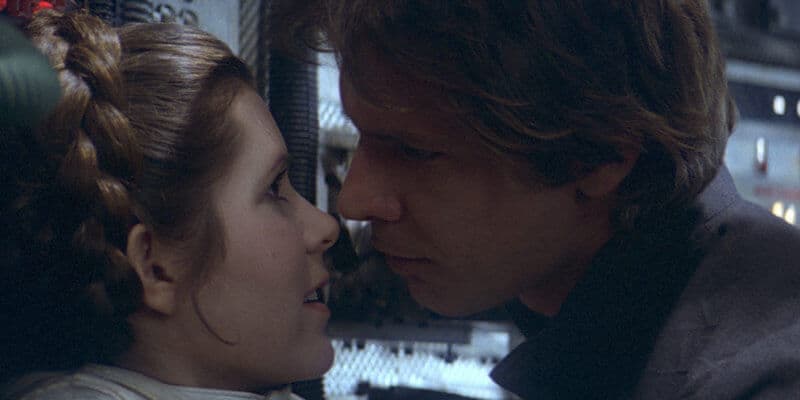 Anyone who has been following along with the Star Wars: Galactic Starcruiser controversy knows that The Walt Disney Company has come under fire for a number of reasons.

Marketing efforts for the wildly pricey Disney Resort hotel — which officially opens on March 1, 2022 — have fallen flat. Fans have gone so far as to call the design of the starship “pathetic” and Disney executives and Imagineers are reportedly aware of the Star Wars fandom’s collective “horror” regarding what they’ve seen so far.

The entire experience has even been referred to as “just a mess.”

Now, though, Disney and Lucasfilm are working hard to make the Halcyon luxury starliner part of the greater Star Wars story, starting with two of the galaxy’s most famous characters — Millennium Falcon pilot Han Solo and Rebel Princess Leia Organa.

Played by 79-year-old Harrison Ford and the late Carrie Fisher throughout both George Lucas’s original trilogy and in Disney’s sequel trilogy, Han and Leia are a love story to be reckoned with.

And, finally, Star Wars fans are about to experience the couple’s wedding for the very first time, onboard the Halcyon, no less.

Per the official StarWars.com announcement:

Star Wars: The Princess and the Scoundrel, a new novel from author Beth Revis arriving this summer. Set just after the events of Star Wars: Return of the Jedi, the story begins on the forest moon of Endor, where Han proposes in the elation of the rebel victory against the Empire. After a ceremony at the site of the victory celebration at the end of the film, the newlyweds depart for a honeymoon aboard the Halcyon starcruiser, the luxury vessel at the heart of the new Star Wars: Galactic Starcruiser experience at Disney World Resort. In their most desperate hour, with the war still raging but the Empire nearing its last gasp, the couple must outwit the Imperial remnants clinging to power.

Although Han and Leia both passed away during the sequel trilogy — he at the hands of the couple’s son, Kylo Ren (Adam Driver) in The Force Awakens and she in the Skywalker Saga conclusion, Star Wars: Episode IX – The Rise of Skywalker (2019) — this is an exciting opportunity for longtime fans to experience a part of the Star Wars universe they’ve never previously “witnessed.”

And, although the Starcruiser Resort has had its fair share of problems, “The Princess and the Scoundrel” ties in perfectly to the fact that Kylo Ren himself is set to be the villain onboard the starship as Guests’ journey goes “horribly, horribly wrong.”

He will be joined by other characters, like Chewbacca and Rey, who are alive during Star Wars: Galaxy’s Edge’s point in the Star Wars timeline, between Star Wars: Episode VIII – The Last Jedi (2017) and The Rise of Skywalker.

What do you think about Han and Leia’s wedding officially joining the Star Wars canon?