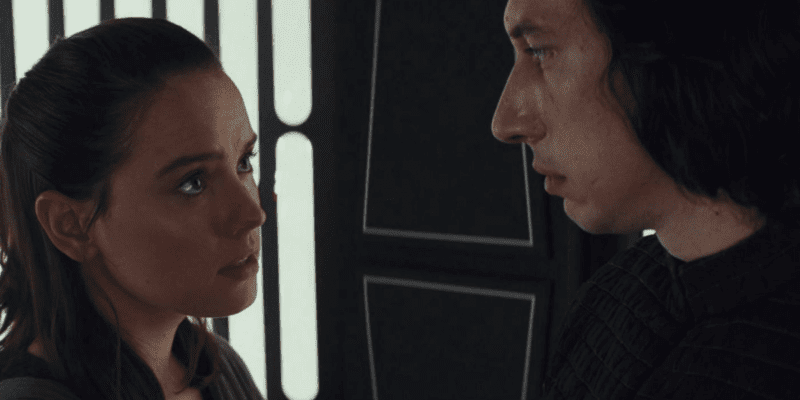 The Star Wars sequel trilogy brought to light not only a somewhat toxic fanbase — people have a lot of opinions about the sequels — but also a few arguably toxic relationships that left viewers either disappointed or upset.

However, most of what the fans received, they were not happy about. One of the most controversial aspects of the sequel trilogy was introducing multiple romances that seemingly led to nowhere.

There are a plethora of things fans were upset about in Star Wars: Episode IX – The Rise of Skywalker (2019), but the “Reylo” moment — the “couple name” given to Rey (Dasiy Ridley) and  Ben Solo/Kylo Ren (Adam Driver) — seems to upset a majority of fans the most.

Towards the end of The Rise of Skywalker, Rey and Ben Solo (previously Kylo Ren, before being redeemed) fought off Emperor Palpatine (Ian McDiarmid) and saved the Star Wars universe as we know it. Giving his life to resurrect Rey — much like she did when healing the stab wound she inflicted on Kylo Ren earlier in the film — and showing his care for Daisy Ridley’s character, the two embrace in a kiss.

The Force connection — a Force dyad — between Rey and Kylo Ren teased in all three sequel films reached its climax in The Rise of Skywalker. However, Ben Solo proceeds to die immediately after the passionate kiss.

Fans called the kissing scene unnecessary and “fluff,” as it largely failed to advance the storyline in any way and ultimately ended Rey and Kylo Ren’s romance immediately after the two shared their feelings for one another with Ben Solo’s sudden death. On top of that, Solo’s redemption was lost as well.

Rian Johnson met a world of backlash the size of a starcruiser after The Last Jedi debuted in 2017. One of the most controversial topics from the film was Finn and Rose’s rocky romance.

After teasing a love interest between Rey and Finn in The Force Awakens, Finn is given another shot with Rose. Ultimately, her character met major hatred on social media — especially after she stopped Finn from sacrificing himself on Crait (which fans overwhelmingly thought was a solid story arc for Boyega’s character).

Rose was given an underwhelming two minutes of screentime in JJ Abrams Star Wars: Episode IX – The Rise of Skywalker (2019), seemingly scraping any connection between the two characters.

Then, Finn was given yet another chance at love with Jannah, an ex-stormtrooper who also fled from the First Order and featured an unknown backstory like Finn — though it is likely the character is Lando Calrissian’s (Billy Dee Williams) daughter. But, this too led to nowhere, and fans were scratching their heads by the end of the movie.

Finn was never given the story development that actor John Boyega and many fans felt he deserved, and Boyega later voiced his frustration with his character’s writing. Fans were also upset, as they wanted to see a fulfilled character development in at least one sequel trilogy star.

With sequel trilogy frustrations behind, the original trilogy features one of the most popular and well-written romances in movie history: Han Solo and Princess Leia.

A damsel in distress meets a pirate smuggler who’s quick with a blaster was a new concept in 1977, but fans of Star Wars: Episode IV – A New Hope (1977), the brainchild of George Lucas, met the couple with open arms.

Han Solo (Harrison Ford) quickly shares his interest in Princess Leia in A New Hope with a hard-to-get attitude, and Leia (Carrie Fisher) meets the “half-witter, scruffy looking, nerf herder” with a similar approach. Throughout all three films of the original trilogy, their romance is explored with Star Wars: Episode V – The Empire Strikes Back (1980) setting the two on a new course and Star Wars: Episode Vi – Return of the Jedi (1983) solidifying their relationship.

The key difference between Han Solo and Princess Leia’s relationship compared to any romance in the sequel trilogy is time.

Fans were given three movies that featured the young space travelers growing their love for one another through snarky remarks and hilarious banter. The audience wanted Han Solo and Princess Leia to be with one another because the relationship was not forced. Nothing about their romance seemed too rushed, and it did not distract viewers from the storyline.

Nothing against the sequel trilogy, but even Anakin Skywalker and Padmé Amidala’s romance — despite how unsettling the age difference may be — seems more fleshed out than the romances in the last three movies comprising the Skywalker Saga.

Again, fans were given a chance over the course of three films to decide if they like Anakin and Padmé being together. Their individual story added to the overarching storyline and wasn’t rushed into one movie and then died out in the next.

Guys felt for Han Solo trying to land a date with the most beautiful space Princess in the galaxy, and girls knew the annoyance of “scruffy nerfherders” constantly bugging Leia and vying for her attention. Sadly, something about the sequel trilogies did not feature this key aspect between their characters and never gave them a chance they deserved at finding love.

Do you think the sequel trilogy featured any strong romances? Let us know in the comments below!