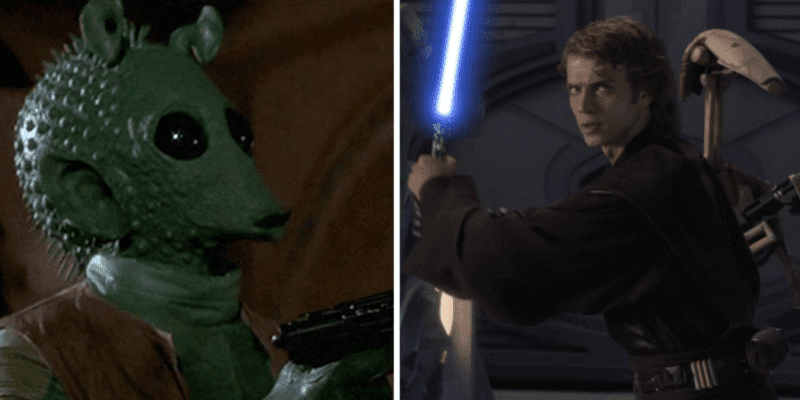 In all of the Skywalker Saga, there’s one scene that every Star Wars fan has an opinion about. Yup, you guessed it. The infamous “Han shot first” scene in Star Wars: Episode IV – A New Hope (1977).

The scene is so iconic that it has its own Wikipedia entry, which shares these details about the controversy surrounding Han Solo (Harrison Ford) and Greedo’s (Paul Blake) gunfight in the Mos Eisley cantina:

In the original version of the scene, Han shoots Greedo dead. Later versions are edited so that Greedo attempts to fire at Han first. Director George Lucas altered the scene to give Solo more justification for acting in self-defense. Many fans and commentators oppose the change, feeling it weakens Solo’s character arc. The controversy is referenced in the 2018 film Solo: A Star Wars Story.

Now, thanks to a deleted scene from the first prequel trilogy film, Star Wars: Episode I – The Phantom Menace (1999), we know that another iconic Star Wars character, the “Chosen One” Anakin Skywalker, fought Greedo decades before Solo finished him off in a smoky Tatooine bar.

The Unsolved Star Wars Mysteries YouTube channel shared the complete scene, which is just about a minute-and-a-half long. You can watch the clip in full below.

The scene, which is officially titled “Anakin’s Scuffle with Greedo,” features a group of children watching young Anakin (Jake Lloyd) and “Baby Greedo,” who were having a fight over the podrace Anakin won toward the beginning of Episode I.

Anakin appeared to be besting the Rodian child until Jedi Master Qui-Gon Jinn (Liam Neeson) stopped the scuffle, with both boys still convinced that they were in the right — Anakin insisted that he hadn’t cheated to win, while Greedo was convinced that the future Jedi Knight had.

Jinn eventually told his Padawan, “Well, Ani, you know the truth. You’ll just have to tolerate his opinion. Fighting will not change it.” The duo walked one way and Greedo walked the other, setting up both characters’ respective futures in the Star Wars universe.

Just as Jinn tried to caution Anakin, Greedo’s friend, Wald, warned him that his temper would get him into trouble — as it certainly did when he met a particular Millennium Falcon pilot.

Anakin, of course, ultimately failed to listen to his Master — who tragically met his end at the wrong end of Darth Maul’s (Ray Park) lightsaber — and Greedo, of course, never learned to control his temper.

Anakin’s story is far from over, as Hayden Christensen is set to reprise his prequel trilogy role as the Dark Lord himself, Darth Vader, in the upcoming Obi-Wan Kenobi series on Disney+ next year. Ewan McGregor will also return as the iconic title character.

Though we don’t know full details about the plot of the Deborah Chow-helmed special event series, we do know that it will take place on Tatooine approximately ten years after Emperor Palpatine executed Order 66 in Star Wars: Episode III – Revenge of the Sith (2005), effectively decimating the Jedi Order — except for a few survivors.