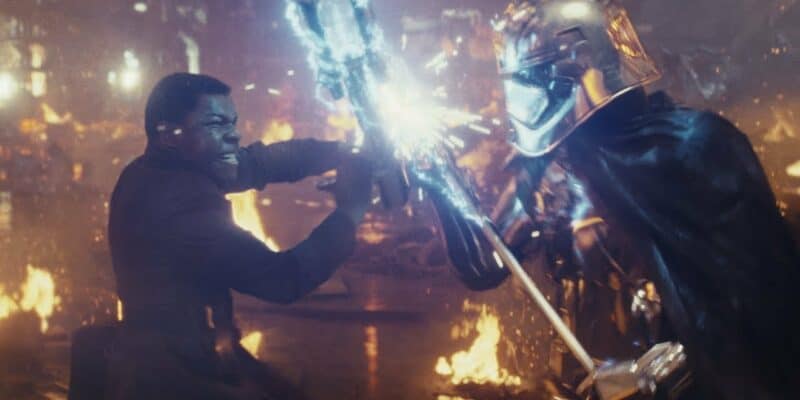 When The Walt Disney Company purchased Lucasfilm, Ltd. from George Lucas in 2012, Star Wars fans were not entirely sure what to expect in regard to the future of the franchise.

Then, in Rian Johnson’s controversial Star Wars installment, Star Wars: Episode VIII – The Last Jedi (2017), fans’ opinion of the sequel trilogy was cemented. Most found fault with the inconsistencies and lack of clarity in regard to Supreme Leader Snoke (Andy Serkis) and Kylo Ren/Ben Solo (Adam Driver), and their relationship to both Emperor Palpatine (Ian McDiarmid) and the Knights of Ren.

There was, however, one sequel trilogy character many Star Wars fans wanted more of — Captain Phasma, a female stormtrooper played by fan-favorite Game of Thrones alum Gwendoline Christie. Unfortunately, the Imperial soldier seemingly met her demise during a battle with one of her former charges, Boyega’s Finn.

Now, though, it appears that Phasma’s story may not have ended in The Last Jedi. One Star Wars writer has a “pitch ready” to continue the popular character’s tale beyond the controversial film.

In a screenshot of a since deleted post — the “Phasma” author clarified she is not currently writing a book, but does have ideas — Reddit user DLCV2804 shared Delilah S. Dawson’s thoughts about continuing the stoic First Order leader’s story:

…and I have a pitch ready to go if the powers that be want the rest of Phasma’s story after she fell through that fiery hole while fighting Finn. We know what her armor is made of and we know she’s ruthless. I want to write what she does next.

Although Phasma didn’t appear in the Skywalker Saga conclusion, Star Wars: Episode IX – The Rise of Skywalker (2019), and has been presumed dead, it seems that this may not actually be the case.

Rumors abound that sequel trilogy characters, including, both Rey and Finn — somewhat surprisingly given Boyega’s scathing comments about the Star Wars universe — will return in the not-too-distant future.

If Dawson gets her wish to write a continuation of Captain Phasma’s post-TLJ tale, it is certainly possible that we could see the revival of Christie’s character as well. Many feel that Phasma didn’t get her just due in the first two sequel trilogy installments, so it would be fan service in the best possible way to see her come back for more action in the Star Wars galaxy.

More on The Last Jedi

The official description of Rian Johnson’s The Last Jedi reads:

In Lucasfilm’s Star Wars: The Last Jedi, the Skywalker saga continues as the heroes of Star Wars: The Force Awakens join the galactic legends in an epic adventure that unlocks new mysteries of the Force and shocking revelations about the past.

Would you like to see Captain Phasma return to Star Wars?