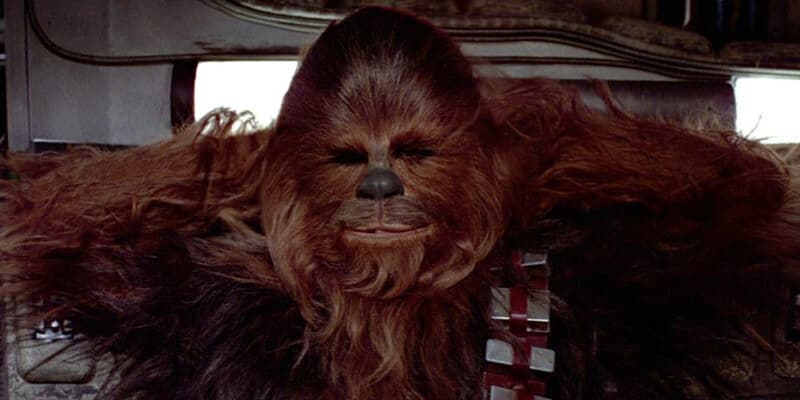 Although it might seem that the show would be more appealing to fans of the Marvel Cinematic Universe — Gunn, after all, is responsible for the hit Guardians of the Galaxy franchise — the third episode has actually caused a major stir with Star Wars fans.

As one article explained:

In Episode 3, Christopher Smith/Peacemaker and Adrian Chase/Vigilante (Freddie Stroma) are captured by Judomaster (Nhut Le) and the butterflies. Chris taunts Judomaster with insults regarding his small stature, saying, “I wanna take you home, play with you with my G.I. Joes. Just don’t f— Chewbacca. Here’s a little-known fact, Wookies have teeth on their a**hole. That’s canon.” While this is not, in fact, canon, the line of dialogue led fans of the show to Google “do wookies have teeth on their buttholes” so much that it became a top search trend…

Gunn himself shared a screenshot of the search trending on Google:

Intriguingly, Wookiees have recently started playing a bigger role in the Star Wars franchise than they have since Chewbacca (Peter Mayhew) was introduced as Han Solo’s (Harrison Ford) in George Lucas’s original trilogy.

Black Krrsantan, a Wookiee who first appeared in 2015 Marvel Comic “Darth Vader #1” by Kieron Gillen and Salvador Larroca, has been introduced as a major character in The Book of Boba Fett, Jon Favreau and Dave Filoni’s first Mandalorian spinoff series.

Krrsantan, a bounty hunter, seems to be set to join forces with Star Wars icon Boba Fett (Temuera Morrison) and mercenary assassin Fennec Shand (Ming-Na Wen) — and possibly even Din Djarin (Pedro Pascal) — as the seven-episode series begins the second half of its first season.

Fan reception to the Trandoshan-hating Wookiee has been positive, so it is certainly likely that Krrsantan will continue to play a key role in the Star Wars story moving forward, particularly as the “Mando-Verse” expands with The Mandalorian Season 3, Rosario Dawson’s Ahsoka, and the rumored Bo-Katan Kryze series starring Katee Sackhoff.

Fans are also expecting additional cameos in the newest live-action Star Wars project. Grogu is reportedly set to appear, for example, and many fans are also hoping for cameos by Timothy Olyphant’s Marshal Cobb Vanth, and, of course, Han Solo — CGI, obviously — but showrunner Robert Rodriguez and other members of the crew have yet to confirm any details regarding special appearances by Star Wars fan-favorites.

The super hero show is officially described as:

PEACEMAKER explores the continuing story of the character that John Cena reprises in the aftermath of executive producer James Gunn’s 2021 film The Suicide Squad – a compellingly vainglorious man who believes in peace at any cost, no matter how many people he has to kill to get it!

You can catch up on all things MCU and Star Wars on the Disney+ streaming platform anytime.