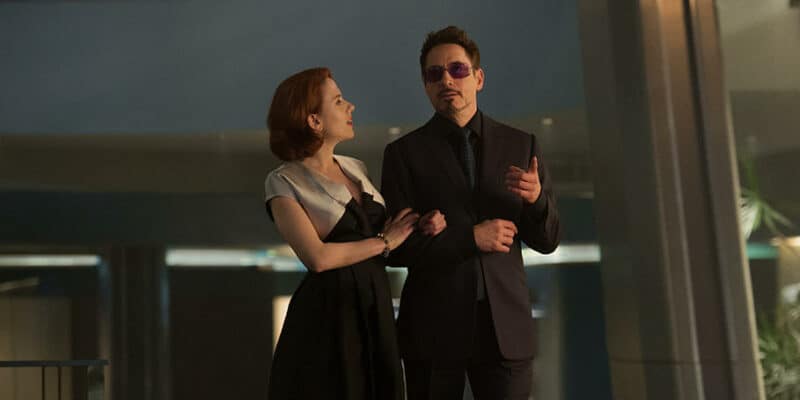 For many Marvel fans, there’s no super hero who more epitomizes the MCU than Tony Stark/Iron Man (Robert Downey, Jr.).

Marvel Studios President Kevin Feige and his team took a chance when they cast the formerly troubled actor, who went on to become one of the most beloved characters in the MCU until he sacrificed himself to save the world from Thanos (Josh Brolin) in the Infinity Saga’s conclusion, Avengers: Endgame (2019).

Unfortunately for his many fans, the Sherlock Holmes actor has made clear he has done “all I could” with Tony Stark, and his death was his exit from the MCU. Downey, Jr. even went so far as to unfollow all of his Avengers costars on social media, causing a great deal of social media buzz at the time — even though the move was really likely nothing more than a choice by his publicity team.

Now, RDJ has re-embraced his Marvel roots, in a way, congratulating former costar Scarlett Johansson (Natasha Romanoff/Black Widow) on becoming 35th recipient of the American Cinematheque Award, which the American Cinematheque non-profit organization annually awards to “an extraordinary artist in the entertainment industry who is fully engaged in his or her work and is committed to making a significant contribution to the art of the motion pictures.”

Downey, Jr. appeared on video at the awards show to offer an unsurprisingly irreverent — yet somehow still heartfelt — message:

“This is Hollywood. We f***ing live to congratulate ourselves. We did the midterm voter drive garbage, the Laura Dern birthday song, which isn’t even due till the week of February 10. We knocked out the Alan Horn retirement message. ‘Last adult standing has left the building, good luck,’ and that bat mitzvah greeting for that traffic cop who gave me a pass when I was double-parked on La Brea. And as usual, 37 asks from Tom Holland, whose sole aim is to proliferate the industry like a f***ing lawn fungus. Who’s left? That’s it.”

“No it isn’t cause I passed on that. I said, ‘N/A with refrets.’ Oh well there it is, there’s the guilt hook, ‘all of the other Avengers.’ See, the fact that everyone else is doing it is what makes it special to NOT do it…..Put it on the g—amn prompter, I don’t care. I have no preferences. I have no opinion. Right? Let’s party. I live for this sh-.”

Recently, many MCU stars reunited to do voice work for Marvel Studios’ first animated series, What If…?, which debuted on Disney+ on August 12, 2021.

You can watch the original trailer for What If…? below:

Do you want to see RDJ someday make a surprise return as Iron Man?