Fans Speak Out: What Should Disney Do With the Hall of Presidents? - Inside the Magic 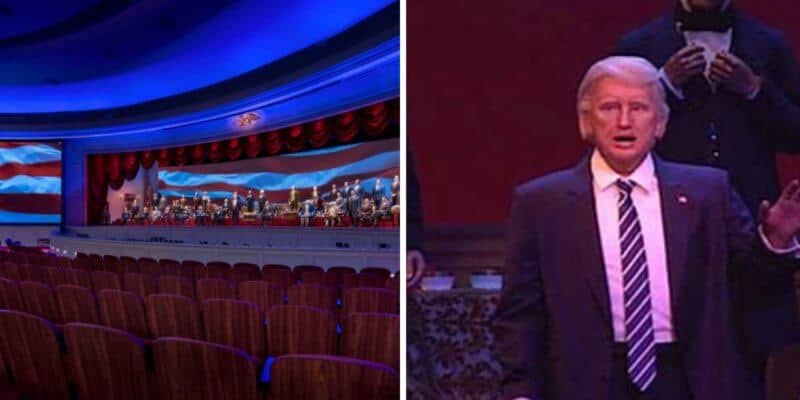 With the dawn of a new Presidential administration comes the closure and refurbishment of Disney World’s Hall of Presidents. Now that Joe Biden has been sworn in as the 46th President of the United States, it is time — as Disney tradition would indicate — for the Hall of Presidents to accurately depict that. We recently reported that the Hall of Presidents closed down just after midnight on Inauguration Day, January 20, 2021, to add President Biden to the attraction.

That being said, many Disney fans and publications have been speaking out as of late about what should happen with Disney’s Hall of Presidents.

For those who do not know, the Hall of Presidents is a theatrical animatronic show with every President of the United States represented on stage. The official description reads:

The Presidents Will See You Now
Watch the curtain rise to reveal startlingly realistic Audio-Animatronics replicas of every President of the United States—together for the very first time. Hear speeches delivered by George Washington and the newest addition to the Hall, 45th President Donald J. Trump.

Unlike Great Moments With Mr. Lincoln — an attraction that Walt Disney helped create for the 1964 World’s Fair and brought to Disneyland in 1965 — the Hall of Presidents does not have a direct tie to Walt himself. With other classic attractions, such as Splash Mountain, being reimagined — in this case, to include characters and themes from The Princess and the Frog — we know that Disney is continuously innovating in both big and small ways.

Now, the question remains: What should Disney do with the Hall of Presidents?

The Hall of Presidents has previously received complaints when a new President is added to the attraction, which is understandable considering a Presidential election will always have voters for both the Republican and Democrat parties. So, in the end — one group is bound to be upset.

That being said, adding Donald Trump to the attraction has created more problems than in past updates. Some fans think the best way to fix the problem is by removing the attraction entirely.

Josh Young from Theme Park University pointed out a potentially significant issue that comes along with the Hall of Presidents attraction — the show is highly political and could incite anger and debate within a theme park that is meant to be the Most Magical Place on Earth. It is undoubtedly a contradictory narrative. Young stated, “Since the new version has opened, two to three Disney security Cast Members are stationed in the theater and rotunda for every show. Why? To keep the peace if someone decides to create a scene.”

Disney World is a form of escapism for many people, where Guests can come together despite their differences and bond over the fact that they are all, in theory, experiencing the same magical day. By placing a controversial attraction in the center of that, the sign at the Magic Kingdom entrance, which reads, “Here You Leave Today And Enter The World Of Yesterday, Tomorrow And Fantasy,” no longer feels as applicable, considering the unbelievable reality is no longer a fantasy.

It could be argued that the most recent United States election season is the most aggressive and controversial in recent history, hence the fact that more Disney Parks fans are speaking out about the Hall of Presidents now than in previous election years.

Disney does not like political controversy. If Guests are caught with political propaganda in the parks, they will be removed and possibly banned. It happened at Disneyland Resort when a Guest rolled out a “Trump” banner on the Mark Twain Riverboat and was banned from the resort. Disney did lift his ban weeks later, but the company takes a clear stance on pushing political values, which is to not do so on their property.

Then why keep the Hall of Presidents open when it automatically leads to political discussions? The Orlando Sentinel noted, “The Hall of Presidents, however, has 12 male enslavers sharing the stage with Trump. If you’re going to present U.S. history, you can’t skip the awkward spots. And these days, anything slightly political will make some Guests uncomfortable.”

Therefore, if this is something Disney would rather avoid, the article suggests that the entire ride needs to be removed altogether. The idea of building another attraction that represents America — such as Liberty Square or The American Adventure pavilion in EPCOT’s World Showcase — and does not divide Guests based on their political views seems to be a strong idea for many fans.

The Orange County Register also noted that the Biden presidency is the perfect opportunity for Disney to reimagine the attraction. The publication expressed that what we see within the attraction is not a realistic depiction of America.

The article’s writer, Robert Niles, noted, “You think if we put those men in a room together, they would stand around nodding at one another? No, I want to see the ultimate Presidential debate. Let them argue. Through that argument, the audience will learn how America and the office of the Presidency have changed over the past 230-plus years that no textbook can deliver”.

I can understand that point of view. The Hall of Presidents gets updated every four to eight years but is only added to primarily and conventionally — with a new animatronic of the sitting President. The current President gives a positive political speech to the audience that always seems quite surface-level. It does make sense for a theme park that is doing its best to avoid political strife on its grounds but doesn’t depict American politics through the ages.

Plus, Orange County Register makes another good point as to why this attraction deserves a reimagining — it doesn’t boast large crowds. It’s an excellent way to escape Florida heat or tropical storms, but its popularity is not the reason why the Hall of Presidents stays open. Even Tom Weber (@webertom1), the husband of Minnesota’s lieutenant governor, took to Twitter, asking, “But seriously, what is Walt Disney World going to do about the Hall of Presidents?”

But seriously, what is Walt Disney World going to do about the Hall of Presidents?

Another option that fans have mentioned is to entirely rid the attraction of the Donald Trump animatronic. Jonathan D. Lovitz (@jdlovitz), Senior Vice President at the National LGBT Chamber of Commerce, stated, “Remove him from the Hall of Presidents, or don’t waste our time.”

Remove him from the Hall of Presidents or don’t waste our time. https://t.co/vV6k9xWrAJ

Every day that goes by that Trump is normalized in the Hall of Presidents is a disgrace to the Walt Disney company.

Spare us your statements and close the Hall of Presidents.

Every day that goes by that Trump is normalized in the Hall of Presidents is a disgrace to the Walt Disney company.

Spare us your statements and close the Hall of Presidents.

Many Disney fans followed suit with the same thought process to remove Trump from the attraction. I am not going to post all of the Tweets here (we would be reading for days), but below is one recent example from Alia (@ohhhalia):

You know what extremely disappointing? Trump will forever live in the Disney hall of presidents.

You know what extremely disappointing? Trump will forever live in the Disney hall of presidents.

On the other hand, there are many supporters of Donald Trump. He boasted over 74 million votes in the 2020 Presidential election and is also a part of United States history, so removing him would pose a firm political stance from Disney — which could deter many Guests who support the 45th President of the United States.

Furthermore, suppose Disney wants to depict American history accurately. In that case, it isn’t likely that they will remove one President from the Hall of Presidents — it would no longer be an accurate reflection of voters or the Electoral College.

It is an opinion that has been expressed by many Disney fans, even those with political views opposing Donald Trump.

ITM reader Christopher said, “But the truth is he was elected. Like it or not. Hate him or love him. History is not always pleasant. Learn from history or repeat it. People nowadays try to erase history they don’t like or change definitions, so it fits their current emotional feelings. Again he was elected, and it is the Hall of Presidents. Soo…”

Additionally, ITM reader Film Fan mentioned, “On an attraction called ‘The Hall of Presidents,’ you include all the Presidents, whether you like them or not. You may like or dislike a president, but dismantling an animatronic of one will still make people angry. If no one likes to hear this, don’t go to the attraction. There’s plenty more to do at the theme parks.”

Many have concluded that the idea of reimagining the attraction is probably the best and, most likely, solution if Disney officials do make a change to the attraction.

We previously discussed that Disney could collaborate with composer and actor Lin Manuel Miranda on a retheme. Disney has the perfect opportunity to further collaborate with the Hamilton creator by renovating Liberty Square and the Hall of Presidents. When Hamilton debuted on Disney+ in July 2020, it received rave reviews. Miranda has also worked with Disney on multiple occasions, from Moana to Mary Poppins Returns, so a collaboration wouldn’t be surprising.

Another fan-favorite idea has been to replace the Hall of Presidents with a Muppets-themed attraction with characters going through American history.

That being said, Disney has noted they are updating the Hall of Presidents to include President Biden, so a dramatic change is not coming to the attraction in the immediate future. Disney has not issued any official commentary regarding a potential reimagining of this Disney World staple.

What do you think Disney should do with the Hall of Presidents? Let us know below!

The opinions expressed in this article do not necessarily reflect the views of Inside the Magic overall.