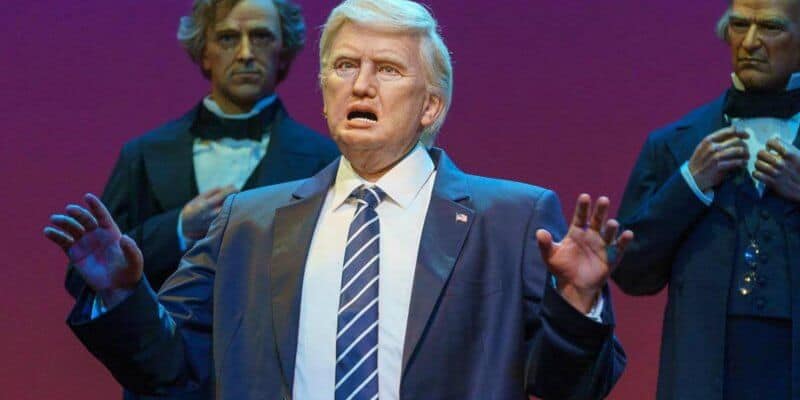 When visiting Walt Disney World, what exactly first comes to mind? Fast rides like Rock ‘n’ Roller Coaster? Creepy dark rides like Haunted Mansion? Maybe even the iconic Cinderella Castle in the center of Magic Kingdom? All of these are good answers and are what most people first think of when planning a Disney trip.

American history, on the other hand, may not even cross your mind when visiting the Disney Parks.

While it may come as a surprise to some, American history is a crucial part of the Disney Parks. Walt Disney had a fascination with history as well as the future. This was a key component of the original idea behind EPCOT.

While EPCOT has certainly changed both in its design and aesthetic, EPCOT’s future leans closer and closer to what Walt originally set out to create.

But back to the topic at hand.

Disney World features many attractions that are both enjoyable and educational. At Magic Kingdom, Guests can kick back, enjoy the air conditioning while giving their feet a break while learning about the various Presidents at the aptly-titled Hall of Presidents.

Walt first created Great Moments with Mr. Lincoln for Disneyland and then had the idea to expand that idea at Walt Disney World Resort with The Hall of Presidents. The show was Walt’s idea, which is exciting as it is an attraction he thought up that Guests can only enjoy at Magic Kingdom. However, Walt passed away before his vision came to life.

Walt Disney, of course, also had a fascination with railroads, something critical to the early development of America as we know it today. Both Disneyland and Walt Disney World feature a railroad and train that Guests can hop aboard.

When Walt passed, Roy Disney, Walt’s brother, took charge to keep the Disney legacy alive and growing, and he remembered how much Walt loved the idea of having The Hall of Presidents at Magic Kingdom. Because of this, Roy decided that he was going to make sure that his idea would come to life.

Unfortunately, because of the political nature of the show, some Guests experience heckling, cheering, and general interruptions the show. The current political climate in America certainly has something to do with the uptick in crowd “participation” during the attraction.

In the past, we have covered examples of situations where Guests cheered after former President Donald Trump was announced at the attraction. This actually lead a Cast Member to warn the Guests to quiet down and not disrupt the show.

A discussion was sparked on this very topic after a Guest complained about the show being interrupted online. The full post reads:

Me and my SO are on our trip to WDW, and today is our first full day at Magic Kingdom.

In the morning we visited the Hall of Presidents, and to our surprise at the end when they are naming all of the presidents- Trump got some big cheers, followed by someone shouting insults when Biden was saying his swear in. Which was promptly followed by more people yelling ‘Shut Up’!

Our last trip was in 2019 (before Covid), but we never experienced that then.

What are other peoples recent experiences of the ride? Did we encounter a bad egg? Or is this happening frequently now?”

While this isn’t the most pressing issue facing the Walt Disney World Resort at the moment, it is sad that Guests’ experiences can be tarnished due to crowds who may choose to interrupt the show. Guests are always encouraged to stay silent and put away all phones and devices before any show starts at Walt Disney World.

Responses to this post ranged from frustration, confusion, anger, and laughter. Many called these interruptions, which some had also encountered themselves, “embarrassing” and “cringe“.

“Dread that stuff like this will happen is why I can’t ever bring myself to go in there anymore. The cheering and booing I’ve experienced a couple times is so so cringe.”

Another user put it quite bluntly:

“People are stupid. Just the idea of cheering on any politician like you would a sports team is idiotic. Much more so with an animatronic.”

Of course, Disney encourages its Guests to remain seated and not to interrupt any of its live entertainment offerings. The Hall of Presidents has been a pretty hot topic in the Disney Parks community since the 2016 election. In fact, Disney fans did not hold back voicing their opinions regarding Disney’s Hall of Presidents attraction as Disney closed the attraction to make way for a new animatronic showcasing President Donald Trump.

A now-removed petition garnered over 15,000 signatures at one point, with “passionate” Disney fans wanting the theme park to break tradition and not allow the Trump audio-animatronic to speak within the attraction. And, once the Donald Trump animatronic debuted, other Disney fans demanded it to be redone.

Disney World continued on with the planned refurbishment, and eventually, a Donald Trump animatronic was added to the Hall of Presidents. And more recently, Disney continued this tradition and added our now President — Joe Biden — to the Liberty Square attraction.

It is important to remember that Walt Disney World has quite a few rules laid out for Guests to follow when visiting. The following activities are prohibited on the property:

More on The Hall of Presidents at the Magic Kingdom below:

Have you ever encountered any issues or interruptions at Walt Disney World?